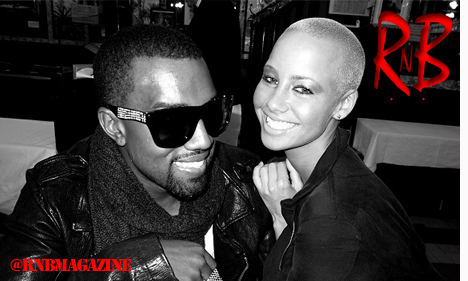 Remember when Kanye West was hanging around with Kim Kardashian?—that included a cameo on her show Kourtney & Kim Take New York—well, his ex lady love, Amber Rose, hints that there was a little something, something going on between the two at some point in time. In late 2010, Kanye helped Kim work on her stalled music career, and rumors about the pair instantly began to hit the net, though neither Kim nor Kanye ever ‘fessed up to any of the romance talk.

But, maybe these days Amber feels more comfy speaking on their behalf. “I mean, come on, like, you know. Come on! We’ll keep it cute,” she teased while stopping by The Wendy Williams Show. She then went into a bit of detail about the timeline of her relationship with Kim’s ex, football player Reggie Bush. “I’m not a homewrecker,” she explained. “I broke up with Kanye and he broke up with Kim. We met right after. We were both going through a hard time. We were each other’s rebounds. It was brief, it was nice, he was a great guy!”

These days, Kim, Kanye and Reggie are the furthest thing on her mind. Amber is all about her boo, Wiz Khalifa. “I want to be with him for the rest of my life,” she said “I never did [believe in marriage] until I met him. I never thought it would happen for me!”

And since Kim is now back on the market, Kanye, perhaps it’s a good time to hook-up–we mean work on some new music again.

“Give It 2 U” Video – Robin Thicke Feat. 2 Chainz and Kendrick Lamar

Dear Beautiful: A Letter To The Broken-Hearted Girl | RnB #13