Over the holiday break, Bey had the internet going nuts after she posted a photo of herself wearing a pair of ratchet earrings to Instagram. According to a few keen eyed fans, Gaga Instagrammed a photo wearing a similar pair of earrings back in September of 2012 and the ladies are promoting a new song. Azealia Banks also confirmed in an interview last year that she recorded a track by the same name for Lady Gaga but she wasn’t sure if it was going to get released.

This gives a lot of clarity to those random ratchet photos but are we ready for Lady Gaga and Beyonce to make ratchet a lifestyle in 2013? And what a great look for Azealia if the track is released with her contribution. 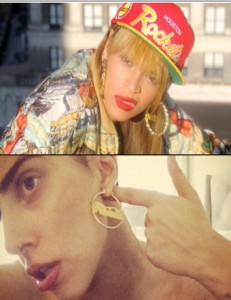