Lucky fans will have the chance to join Beyonce Knowles in the biggest sports event of the year. The singer announced a photo contest that allows 100 fans to appear with her at the halftime of Super Bowl XLVII performance on February 3.

Beginning Saturday, December 29, fans can submit images of themselves in various poses. These images will then be used in a TV commercial for Beyonce’s performance. From 100 images, half will then be chosen to personally join the singer on stage. These 50 people are also allowed to bring a friend with them.

The contest, which is sponsored by Pepsi, will end on January 19 but for those wishing to appear on stage with Beyonce must submit the photos before January 11. The upcoming Super Bowl will take place at the Superdome in New Orleans and air live on CBS.

According to the press release, fans who visit www.pepsi.com/halftime will be given a series of poses to photograph, including head bopping, feet tapping, and even hips shaking. Hundreds of photos uploaded at www.Pepsi.com/halftime with the hashtag #PepsiHalftime will be used to introduce the Pepsi Super Bowl XLVII Halftime Show and to welcome Beyonce to the world’s biggest stage.

Beyonce recently struck a $50 million deal with Pepsi to continue becoming its spokesperson. Beside a new TV ad for the soft drink company at the Super Bowl, Pepsi will also put Beyonce’s face on limited edition cans that start going on market in March. The deal also includes a sponsorship of her tour next year to promote her new album as well as other projects like live events, videos or “a cool photo shoot”. 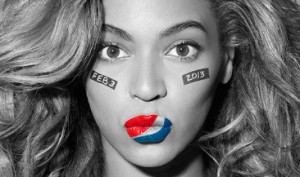 Alanna Nickerson Has Found “A Way To Love”

Chris and Trey Putting Ladies “Between the Sheets”

5 Shoes You Can’t Live Without!