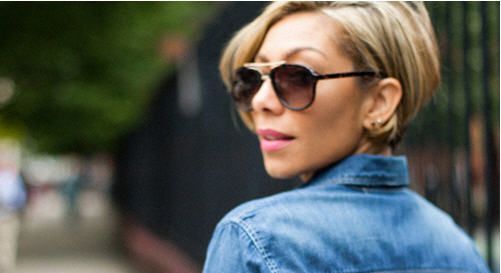 Q. I love that the album really speaks to a certain turning point in one’s life, Summer of 17. Did you set out to create something like that or did you look at the tracks you had and saw a common thread?

A. Honestly, none of these tracks were a part of the album. Maybe four or five months ago we were just talking about wanting to release an album. I was completely emerged in album mode and one of my managers on my team always cracks jokes and makes fun of me and calls me seventeen. She always says I’m the late bloomer, I’m always the immature, you know, reckless, crazy one. Well, I feel like I’m  seventeen again, I kind of feel like I have the world in the palm of my hand, like I can do whatever I want to do.  In the last year or so I haven’t embraced that necessarily, because I have been so literally– A, trying to complete the album that I never finished and B, kind of apprehensive about stepping out on my own and what the response and reaction from fans and industry supporters was going to be without the heavy label and co-sign behind me. And I felt like I wanted to create a project that was a lot more of my personality, who I was. I think that was the hard part for me in the beginning , making quintessential R&B records that were really heartbroken and love scorn and sad and melancholy. You know when you meet me my personality is happy go lucky, cracking jokes. I’m really like an optimistic, excited, fun-loving person in general. So the music maybe didn’t resonate the way I wanted it to, because it was so one-sided. So I felt like let me create a project that’s going to be really about where I am and how excited I am about this next phase in my life. I’ve mapped out and been really concise about what I want to talk about. The love in my life right now, everything that is going on, my new team, the vision and my new hair, you know, simple things that I feel confident about.  So I think Summer of 17 for me, specifically is geared towards the happiness I have in my life right now, the light-hearted approach that I‘m taking with my life now. I don’t get caught up with the silly stuff.

Q. What were you up to and what was your life like in real life at 17?

A. I was staying out all night. Like friends were having parties and I was running around. I was running around all over the place. I say the majority of the time, honestly, late nights on the subway riding home. Riding the subway from the Bronx to Brooklyn, just really having a good time vibing out with my friends.  I went to a performing arts high school. It was very much a creative environment at all times. Going to concerts, writing music together, performing music together for our peers, that’s what was going on. That was what my seventeen year old self was about. It was really about stepping out into my own. I was a tomboy for the first three years of high school. I dressed like a boy.  I wore baggy jeans. I wore sweatshirts. I really tried to downplay the part of me that was feminine.  I always make a joke that as a tomboy I didn’t hit puberty, puberty hit me. I really didn’t know how to respond to being developed and being curvy, so I kind of rejected it until I was seventeen. Until I was comfortable with who I was as a person, so that I could just shrug off whatever was coming my way. To know my worth, know my value. Which is where “Act Like That” came into play. You can flirt with me, you can say whatever, but I know if I wasn’t in tight clothes, if I wasn’t leaving nothing up to the imagination, you wouldn’t look twice.

A. We had a blast! I mean literally. When he was writing his verse we were laughing. I was laughing, he was in the booth laughing. He is a really good friend of mine, so we always laugh and talk about how competitive we are by nature. Women have just as much fight and ego as guys do. It’s kind of like we all front at one time or another for the sake of game, keeping the chasing game interesting. I thought it was a perfect combo of when you do R&B and you make loving romantic records and people misconstrue that you are always vulnerable and soft, and it’s like naw, sometimes I gotta show too. I’m not going to back down. As a woman that’s a stance we usually don’t take pride in, but it’s there. It is a great song to lead the project. I love that I did it with someone else from New York. We shot the video and I was really adamant about it feeling like a New York summer in the day. Like we’re BBQin’, we’re chillin on the stoop, we’re just out on the block having a good time. It’s like Battle of the Sexes almost, it’s really dope.

Q. What do you hope people will get from listening to this album? What do you want people to take away from it?

A. I always wanted people to look at me like the girl that everybody wanted to hang out with. I feel like this album really gives that off. It’s like the guys maybe want to kick it with me because they know I’m going to be with all the girls who are having fun, playing spades, drinking in the backyard, whatever.  I think that is more of what I wanted to portray because that really is at the core of who I am. I’m a girl’s girl and I like to support women and have fun. You know, just be out and about. This is summertime. It’s a good time to explore, meet new people, make new connections and learn more about yourself.

Q. Summer really is kind of a “coming-of age” season. I love that you set the album at that time period. There is something about it, like when people come back to school in the fall or come back from a summer vacation, they seem different. They are different.

A. Yes, and you want to feel different. You want to have enough life experiences that make people look at you like, “Where were you at? What were you doing?”  I feel like this was definitely the right time to re-emerge as an artist as well, it is completely fueled by who I am creatively as an artist.

Q. Is there any certain song in particular on this album that really speaks to you? That is maybe a favorite or defines the album?

A. “Not Afraid” is the record on the EP that really speaks to me on where I am now, but also where I was at 17.  I’m 29 now and all the friends I grew up with are getting married and trying to have babies and planning their adult lives. You know women pushing 30 are counting their eggs now. Just so much pressure to conform to, that standard for women-you’re supposed to have babies at this age and you’re supposed to be here at that. I felt that way at 17 too. Pressured . You gotta go away to college, you gotta get into a field that’s going to give you a six-figure salary, and I wasn’t there. Like I‘m not thinking about marriage or kids now.

Also “Not Afraid” sums it up. I think that’s because it was the harder song for me to write. I found myself really frustrated with it while I was writing it. It just brought me back to so many moments not only in my career, but also my life, where things hurt. And I was almost not willing to acknowledge that it hurt because I thought the pain was weakness. Me feeling pain, my feelings stained by other peoples opinion of me, or just not feeling adequate, not feeling good enough, feeling insecure. I mean these are emotions that plague us, no matter what age you are. So to be able to acknowledge that pain and still move forward, I’m like, you know, listen—I am not paralyzed by this, yeah it hurts, but I’m okay. I’m not afraid at the end of the day. I am what I am and moving forward and growing up is really difficult. I think if you can’t acknowledge that, then maybe you may not really be growing up. I think the evolution of who I am is ongoing. So that song to me is definitely the key record on the project.

Q. “Not Afraid” hit me. It does hit the mark on reflecting and accepting that time period and the present. What is a life lesson you learned or took away from yourself then to yourself now?

A. Yeah, I think “Not Afraid” hit it on the head, because you are able to look back at where you were at certain points and what your state of mind was at that time, but you weren’t afraid or maybe you were and fought the fear and you went for it anyway.  I think there is some validation in that and some recognition you are allowed to give yourself.  I think sometimes we make choices and make mistakes that we carry with us all the time and ultimately for me “Not Afraid” is for me letting go of that. Letting go of all those burdens I let define me for too long. Now I am at a place I can look back and say this was my past, this is what happened, this is what I’ve done. And now this is how far I’ve come, but I still have more to go. I think that is why the song was so hard to write, not that the lyrics were hard, but like damn, I am acknowledging where I’m at now as a person and saying I can’t see the future, I can’t see what in store, but I feel I’ll be fine. If I stay the course. I know that my faith in myself and God and all the elements around me is what’s keeping me on the right track. I think anybody can relate to that, whether concerning career or love or family. It’s about women I know who feel they had babies too early, they look back and are like damn, I wish I would have done this differently. But I’m like you’ve grown into the most incredible woman you could possibly be because of this blessing in your life. You know every lesson is a blessing in its own right. Reaching a point where you can acknowledge that and forgive yourself for all the things you can’t change, I feel like that’s the greatest power you have.

RnB Magazine #12: The Jackson’s Next Generation Taj, Taryll, and TJ, Talk Living in the Public Eye, Dealing With Nasty Rumors and Lies, Seeking Individuality, And Their Journey For Normalcy

Throwback Thursday: Interview with Jade Turpin After Season Finale of Match Made In Heaven

From Tragedy to Triumph, Triple Crown Winner of Queen of the Desert Jazymn Simone-Echelon Inspires Others

[…] If you missed our exclusive interview with Bridget Kelly, check out this link Bridget Kelly RnB Interview […]