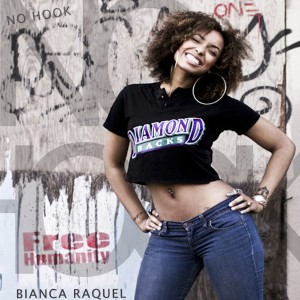 BIANCA RAQUEL
debuts
“NO HOOK”
(Music and words by Bianca Raquel)
VIDEO
>>>> Direct Link <<<<
http://www.youtube.com/watch?v=EoUIDko-uRA&feature=youtu.be&a
AUDIO
>>>> Download <<<<
http://soundcloud.com/thebiancaraquel91
Rising talent Bianca Raquel released her first record today—No Hook— via her Youtube channel (www.youtube.com/thebeautifulb91).
The 21 year-old singer/songwriter/producer/musician invites us into her personal life through a collection of 12 songs married with video footage titled “The Detox.”
No Hook is the first of the series and fans can expect to hear new music from Bianca Raquel on the 12th and 21st of each month.
@TheBiancaRaquel
(www.twitter.com/thebiancaraquel)
For Booking Inquiries:
Kyle Allen: [email protected] | 267.237.5959
Vivian Scott Chew: [email protected]timezoneinternational.com
www.BiancaRaquel.com
Bianca Raquel is a singer, songwriter, producer, performer and musician. Growing up between two households with two different lifestyles and sets of rules between Upstate New York, NYC and New Jersey, Bianca found balance and consistency to be her biggest obstacles. The one constant variable in Bianca’s life has always been music. Practically growing up in the Apollo Theater, she dissected every rehearsal and performance; learning exactly what works onstage. From a very young age, Bianca began writing songs instinctively. “One day my dad heard me singing and he was like ‘who’s song is that?’ When I told him I made it up in my head he was like ‘you should start writing them down.’” Soon, Bianca had tons of notebooks filled up with her songs. It quickly became apparent that Bianca’s gift was special because when writing songs, she automatically heard background and instrument arrangements along with the lyrics and melody. She recorded and produced her first song at the age of 9. “My dad took me into his studio and said ‘I want you to tell me how to play all the music you hear in your head and sing all the voices you hear.’”  At the age of 13, Bianca was the youngest student to attend the Grammy Foundation’s First Annual Grammy Camp. There, she was surrounded by 47 other talented students who inspired her to improve and nourish her talents. At 15, her father invested in her dreams and bought her a Roland Fantom. He told her to make it her business to learn her Fantom inside and out, using it as a way to take her production skills to the next level. He instilled in her a sense of work ethic and suggested that the more tools and skills she equipped herself with, the more her star would rise. So she practiced and found herself in her music.  Now a student at Berklee College of Music, where she continues to hone her skills, Bianca feels humbled and blessed by the opportunity.  “At Berklee, I have been awarded the tremendous gift of musical discipline and theory which was the missing piece to my puzzle.” True to her art and to herself, there is depth to Bianca’s music, with influences ranging from Stevie Wonder to Radiohead. “One thing I pride myself on is having the ability to never be boxed in or labeled as simply one thing or another. As an artist, I don’t have to choose a genre but simply juice every drop of creativity I possess and give the world something new.” Tackling reality in her music with wit, passion and sophisticated lyrics beyond her years, the brand and legacy of Bianca Raquel is born.  As the daughter of world-renowned musical director/arranger Ray Chew, it’s clear that the gift of music was passed down a generation.
previous post

Small Town Girl, Big Voice: Carri McMullan On Being an Independent Artist and Her Soon To Be Released Album “Ruby in the Rough”

Raphael Saadiq – Movin’ Down The Line – Behind The Scenes

Tamar Braxton Guest Stars In An All New Episode of ‘In The...