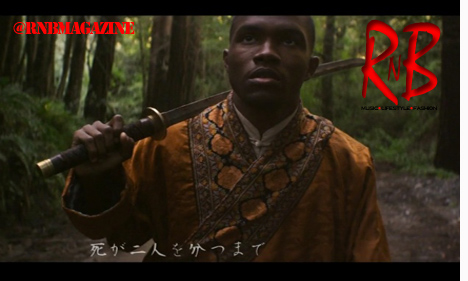 Odd Future’s lone R&B artist Frank Ocean is having one helluva of year. Just a year ago, he was an unknown artist on Def Jam’s roster with a shelved album. Today, he’s a sought-after singer-songwriter with contributions on Jay-Z and Kanye West‘s celebrated LP ‘Watch the Throne’ and songwriting credits on Beyonce‘s ’4′ album.

All of this probably wouldn’t have happened if he didn’t released his mixtape ‘Nostalgia, Ultra,’ which, in our opinion, is one of the best unofficial official R&B albums of the year. One of the standout tracks on the collection is the somber love ode, ‘Swim Good.’ Ocean recently dropped the visuals to the track and it’s just as dark as the song itself.

The video, directed by photographer-turned-director Nabil Elderkin, features Ocean as a heartbroken ronin wearing a katana and a knitted panda mask as he watches his orange-colored Lincoln town car blow up in flames. What we don’t realize until later is that he sliced up his former girlfriend and probably disposed of the dead body in the car’s trunk.

Yes, it’s a grim video. But if you are familiar with Odd Future’s motif, then you would know the group is known for their misogynistic lyrics and imagery. It’s not something we condone here at PopCrush, but if you ever had your heart broken so severely that you have extremely dark thoughts, you will understand Ocean’s video.

The great thing about Ocean is that he’s an honest singer who can effectively convey his emotions on infectious ballads. We hope he continues releasing more music videos from his stellar ‘Nostalgia, Ultra’ album.

The MTV Movie Awards Give Some great highlights and Performances