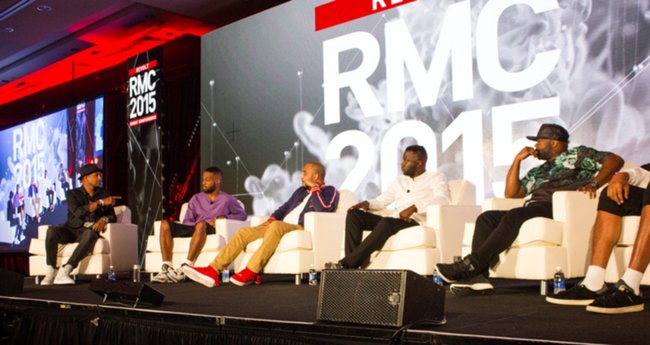 What do we think? Does the independent artist’s immediate access to the mass public water down the quality of music these days? Or, are A&R executives crying us a river because they are not quite as all-powerful as they once were?

Yesterday (Fri. 10/16) was Day One of the 2015 Revolt Music Conference in Miami Beach, FL. Provoking conversations regarding the state of the music industry in today’s digital world flowed back and forth between A&R execs and artists.

Business panels like the one on “The Lost Art of A&R,” moderated by artist, Kenna, were geared toward the consumer and aspiring artist. Kenna dove right into a topic that is key to the changes we are seeing in the music industry these days.

Now that artists can make their own music at home and immediately upload it on YouTube or Soundcloud, with no filtering process, what is the role of A&R?

Breyon Prescott, Head of Urban A&R at Epic Records deems it a problem:

“I think the YouTube era has killed us,” Prescott said. “The digital era has killed what we do. I don’t think every artist is good. I think the music was a lot better before and we held the key to a higher standard. I’m not saying a lot of artists today aren’t great, but that’s just the process.”

So, does the digital era give a fair shot to genuine raw talent that otherwise would not have the necessary “connections,” “luck,” and/or “right image” to “make it?” Or, does it clutter the airwaves so that true talent is drowned out?

Panelists considered both sides of the coin: YouTube and social media are a blessing and a distraction.

Building a fan base online is commendable, but social media can also create a false sense of engagement, and, theoretically, that’s where A&R comes in to decipher what is legitimate engagement and what is not. (Legitimate engagement presumably translates to moneymaking.)

“Most importantly,” said Prescott, “even if artists are self-starters who already have certain success, the A&R process doesn’t stop at finding them. Once you have a deal, our responsibility is to develop artists,” he continued. “Even if they have songs. Even if they have a following.”

Panelists agreed that this means having a vision for that artist, an understanding of that artist’s vision, and also the resources to bring that vision to reality. In today’s music business environment, that also translates to hard cash decisions.

“You have to be smarter with money,” said Dallas Martin, senior VP of A&R at Atlantic Records. “All your sessions have to make sense. You really have to have a vision with the artist. Artists don’t see or care [how much something costs]. But the label is going to be on you.”

It seems a lot of artists are figuring out how to do this on their own these days and that A&R execs can now use social media as a place to scout talent–simply work that into their routine, or the routine of their assistant. If I were an A&R exec, I would also hit up the occasional open mic. I’ve seen some crazy good talent at open mics in Los Angeles!

To be fair, not all the music released by major labels is stellar. And, I’ve heard some excellent music released by independent artists. Personally, I think the masses want more than just what they are spoon-fed by the majors/gatekeepers. There’s a sort of balancing-out taking place.

Eventually, the cream finds its way to the top, one way or another.