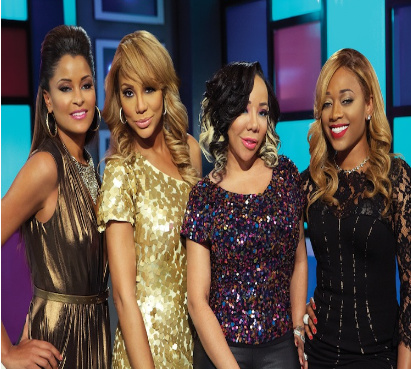 Last night, VH1 took “ratchet” to a whole new level (literally) with Tiny’s new talk show, Tiny Tonight. The show was hosted by TI’s wife Tameka “Tiny” Harris and featured her celeb friends Trina, Tamar Braxton and Claudia Jordan. The show was an hour long which gave the ladies more than enough time to go through some of the hottest topics of the year like whether or not Beyonce faked her pregnancy, The Rihanna/Chris Brown/Karrueche love triangle and the Mariah Carey/Nicki Minaj American Idol drama.

Tamar, who wasn’t afraid to speak her mind throughout the hour, was catching it left and right on Twitter. First, from the Beyonce stans who were pissed that she didn’t believe Beyonce carried her baby, and then from Love and Hip Hop Atlanta’s Joseline Hernandez, who was angry that Tamar said she still believes that Joseline is a man. Joseline tweeted: 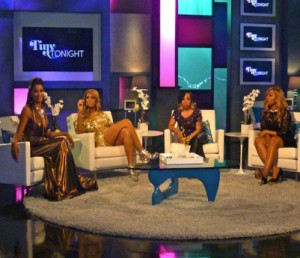 @TamarBraxtonHer b–ch u got a d–k u f–k u know who whit you wanna be beyonce old PUTA. U a mess. I stay on u hoes mind. U 2 old

@TamarBraxtonHer I fight old hoes. Iol. #trowback. N give it up u like 100 u been trying all your life. Get back brawd. Lol

Judging from the reaction on twitter, there is an audience for the show and it has the potential to be successful. (It was a top trending topic throughout the night.) There were times that it was easy to forget that Tiny was the host of the show, but she was very charming and relatable. Throughout the hour, she shared personal stories on meeting Whitney Houston and getting a chance to rub Beyonce’s belly. She also revealed that Mimi, from Love and Hip Hop Atlanta, used to clean her home. The other hosts all brought a different dynamic to the show as well. While Tamar was very outspoken, Trina was very reserved and politically correct as to not piss anyone off. Claudia Jordan was very poised and articulated her thoughts on each topic very well, however, there was noticeable tension between herself and Tamar Braxton.

Tiny’s hairstylist Shekinah will become a fan favorite. She took to the streets to ask random folks about their favorite reality show and if they’ve ever heard the term, “Ratchet”. She eventually joined the ladies in the studio and was super funny as she gave her commentary on various topics, including the Tanning Mom.

Overall, if you don’t mind seeing celebs giving commentary on other celebs uncensored, this show may be for you.

Catch a few clips from the show below:

Shekinah on the streets

Hit It and Quit It and Other Confessions of the Single Dating Mom: Tips for Dating With Children… (My Lifestyle RnB #12)

Tyler Perry Hires Kim Kardashian To Co-Star In Next Movie

Signs He/she May Be Cheating