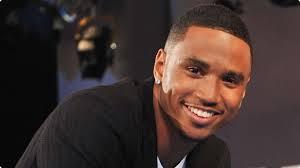 Trey Songz seems to have a positive outlook on owing back taxes to the IRS, and apparently he gets it from his mother.

The sexy RnB star brought the issue to social media by tweeting a text conversation with his mother, whose number is saved in his phone as “Mumma!” Awwww!

It appears that Songz is facing the music dead-on. He texted a photo of himself with a sad-face, along with: #whenugottadrop800. His mother replied with a beautiful sentiment that we can all learn from: “Must be nice to even be able to wire $790 K!” She adorned her text with a smiling emoji with heart-eyes. 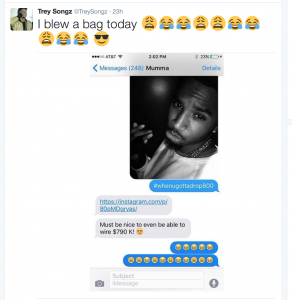 Seems Mumma is doing her job in brightening her son’s outlook on a taxing situation, because he responded with lots of emojis laughing so hard they’re crying, along with a few frowning faces. The final emoji he tweeted is smiling wide and sporting a cool pair of shades; so we know he’s good with it.

Mumma knows the score. The more you owe in taxes, the more fortunate you are! How proud she must be of her fortunate son.

Is Trey Songz gonna let these damn back taxes turn his winning smile into a frown for long: Oh, Na-Na!”

“You’re Next”: Not Your Ordinary Horror Movie

Look Your Best For Every Festival

VIDEO: Nicki Minaj – Right By My Side & Starships Performance on...