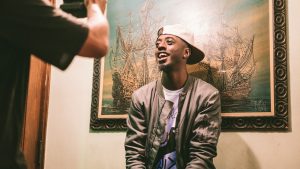 Long time friends and Milwaukee natives, B. Justice and Jacob Latimore are just two dudes hanging out, doing what dudes do; discussing females, in Justice’s first visual offering from his upcoming Rico Love-hosted project, “Immortal”, due out later this summer. The video debuted on Vibe last week. Using a host of double entendres, the guys let these females know in no uncertain terms that not only are their motives for wanting to chill under scrutiny, they will be subject to the fade away regardless of how fine they may be if they don’t come correct.

“Being a new artist and always meeting & coming in contact with new women you always have to think of what these girls real motives be. When I approached writing this song I wanted to display my point of view of the ‘rapper dating scene.’ There’s girls that wanna date you just to get seen, girls that talk to more dudes than they can count, or the very beautiful but stuck up chicks that are use to being chased and you gotta remind them they can get hit with the Fall Back as quick as anybody else. The topic isn’t new but our approach of discussing it is, referencing to Kobe Bryant & hitting you with the “Fade Away.” Just some funny things we say among guys over a really dope beat.” Justice shares.

Though B Justice may be new to many of you, he has in fact been a staple of his home town Milwaukee’s music scene for some time. Through his clothing label, Scholar Life Apparel, Justice has self -funded 3 mixtapes, “Law and Order”, “Scholar Life”, and “Scholar Life 2”, and 10 videos that can be seen via his YouTube channel. This past year, his passion for music coupled with his undeniable talent have landed him the opportunity to open up for major recording artists like Tyga, , Machine Gun Kelly, DJ Premier and Common. What is Scholar Life? .  The movement was inspired by his personal ambition and philosophy of life.  He believes a “Scholar Life” is accomplished when one can make a living doing something they love and have perfected.  As his artistic approach has evolved, the scholar in him has emerged, bringing about specific intended goals to reach his audience in a way that they leave feeling empowered, and motivated to be scholars in their own right, and that they continue to support him throughout his Scholar Life.

Expect to hear a great deal more from this accomplished young man. His star is rising, he is aligned with some amazing talent and he has earned his spot as part of Milwaukee’s music elite in his own right.

ANDRA DAY PREMIERE’S STUNNING “THE ONLY WAY OUT” MUSIC VIDEO FROM UPCOMING...

The Weekend is still at the top with “The Hills”but it seems...

Angel Gold – Get It On