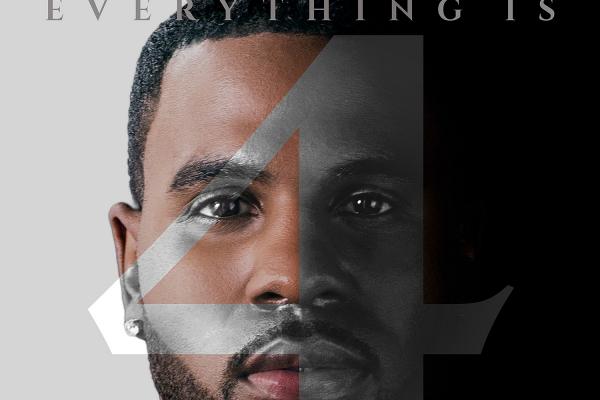 Jason Derulo’s fourth studio album, Everything is 4, is out today, June 2nd. The 11-track album features appearances such as Jennifer Lopez, Stevie Wonder, Keith Urban, Meghan Trainor, K. Michelle, Matoma, and pop-songwriter Julia Michaels.”Jason Derulo jumps into every track with equal enthusiasm, reassuring voice adapting easily to each new setting and providing continuity across the LP,” says Rolling Stone Magazine. The album release is led by hit-singles “Want To Want Me,” “Get Ugly,” “Cheyenne” and “Broke,” proving the triple threat, singer, songwriter and dancer, Jason Derulo, is unstoppable in 2015. Everything Is 4 is available here: http://www.smarturl.it/EverythingIs4

“Mr. Derulo may be the only true cross-genre pop star of the day” – NY Times

“Perhaps more than any other artist in pop, Derulo has created a perfect equilibrium between his two modes, allowing his split personas to feed off of and support each other. And it’s working commercially.” – Billboard Magazine

“Derulo’s fourth LP has a little bit of what its title promises – everything.” – People Magazine

EVERYTHING IS 4 OUT TODAY http://www.smarturl.it/EverythingIs4

Derulo has made himself into a bonafide sex symbol recently gracing the cover of Billboard Magazine’s Mind, Body and Soul issue and appearing in the summer issue of Men’s Fitness Magazine, which captures the essence of Derulo’s journey simply stating, “Sometimes you have to lose something before you can truly appreciate it-and in pop musician Jason Derulo’s case, it was his body.” Derulo’s relentless dedication to mind, body, and soul has enabled him to stay focus and frankly, quite fit.

Album release week kicks off in NYC today, June 2nd at 7pm ET, as iHeartRadio hosts the ultimate release party for Derulo. Fans can tune in free for a live video stream of the exclusive concert here. Derulo will be taking over iHeartRadio’s Twitter. Ask him anything using the hashtag #iHeartJasonDerulo starting at 3:15pm ET. Thursday, June 4th, starting at 9pm, Derulo invites his fans to a free performance and autograph signing of Everything Is 4 in Times Square at The Hard Rock Café NY (1501 Broadway | New York, NY 10036). Then on Friday, June 5th at 11:35/10:35c tune-in to The Tonight Show Starring Jimmy Fallon on NBC to see Derulo’s performance of “Want To Want Me.”

ABC’s Good Morning America presents Jason Derulo on Friday, June 12, 2015 at the 2015 GMA Summer Concert Series at Rumsey Playfield in Central Park (near the entrance at E. 69th St and Fifth Ave). The concert is free and open to the public. Doors open at 6am. Concert airs live between 7-9am. He will also perform “Want To Want Me” at the E3 (Electronic Entertainment Expo) to help launch Just Dance 2016. And just today, VH1 Save The Music Foundation announced that Jason Derulo will headline Hamptons Live. The ticketed benefit will take place at a private residence in Sagaponack on Saturday, August 8th at 8-11pm. Tickets are now available here.

“Music education played an important role throughout my childhood and is something that remains very close to my heart,” said Derulo. “I’m honored for the opportunity to team with VH1 Save The Music Foundation this summer in support of a cause that’s so dear to me. Come out and join us in the Hamptons!”

Tune-in every Monday at 8pm ET/PT on FOX as Derulo has joined as one of the new judges on season 12 of So You Think You Can Dance with Paula Abdul, alongside returning judge Nigel Lythgoe. The show premiered last night (June 1st).

In just five years, Jason Derulo went from writing songs for Lil Wayne, Pitbull, Diddy, Sean Kingston, and others, to selling nearly 60 million singles worldwide and racked up over 2 billion views on YouTube, 2 billion plays on Spotify, and a radio audience of over 17 billion. To date, he has 10 career-defining platinum singles, including “The Other Side,” “Talk Dirty” (feat. 2 Chainz), “Wiggle” (feat. Snoop Dogg), “Whatcha Say,” and “It Girl.” No stranger to making hits, Jason lands another radio dominating hit with lead track, “Want to Want Me,” on the verge of his 11th million-selling single and No. 7 this week on the Billboard Hot 100.

Tish Hyman Releases New Single “What It Feels Like” With Ty Dolla...