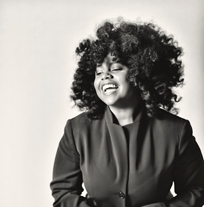 The hot new R&B singer is putting her best foot forward on her brand new single, “Waves,” showcasing not just her dynamic voice, but the passion and energy that course through her work. The song is a sensual, slow burn: beginning with Jessica’s bare voice over a light piano riff, “Waves” gently layers more and more sounds and before exploding into an ecstatic vocal climax. It hints at the soul ballads of the 70’s while still carrying a modern edge.

“Waves is my favorite song on the album,” says Jessica Childress. “I wanted to paint a picture with the music and the lyrics of the tide going in and out, drawing you further out into the deep — that helpless feeling that you sort of give yourself over to. It’s lush and it brings a sense of presence that I found comforting in the chaos of this world.”

“Waves” is the third single to be released from her upcoming debut album Days, following her first single “Far Away” debuted on Apple Music earlier this year and was turned into a remix EP in May 2017. The full album will be unveiled in early 2018.

For more information and the latest on Jessica Childress, also visit:

Kelly Rowland Will Be Featured on New Busta Rhymes Track