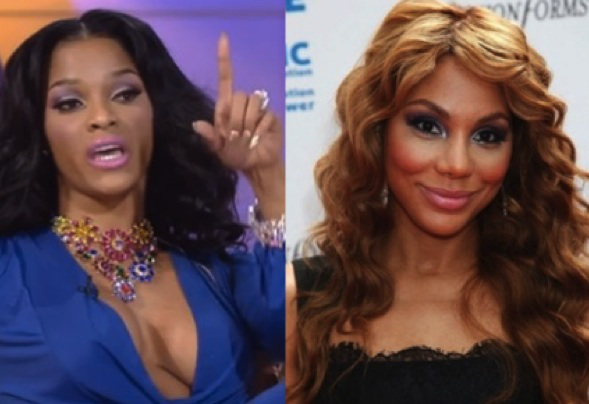 Earlier this year Love & War singer Tamar Braxton and Love and Hip Hop reality star Joseline  engaged in a Twitter beef after Tamar called Joseline a man on Tameka “Tiny” Harris’ VH1 show, “Tiny Tonight.” After going back in forth including a respose in which  Joseline  calling Tamar an “old crusty Beyoncé wannabe,” Tamar, who is no surprise to controversial comments, took the high road and offered an apology. .

According to Sister Sister

The “Love & Hip Hop: Atlanta” star, recently spoke to Rolling Out about her fellow reality star/musician and suggested that maybe the new mom is just jealous.

“I’m the baddest [email protected]# out there in the streets. [They say] ‘how dare this little immigrant girl come from Puerto Rico [and] just become a star.’ You know I hate that s#_t! They’re jealous,” said Joseline, who added. “Shout-out to Tamar Braxton.”

Not only did Joseline accuse Tamar of being jealous, she also questioned her talent.

“She wants to be a bad [email protected]# like myself but she can’t be. She’s been trying to come out with music for how many years? [It’s been] f_$%g 20 years since her sister [Toni Braxton] was a star,” she said. “I love the haters.”

One person Joseline does not seem to have an issue with now is beau Stevie J, who she supposedly married since the “LHHATL” finale aired.

“I mean we do go together — it just works. I never met a guy that everything just works out. I’ve had a lot boyfriends but that one — we just work out,” she said. “I love him. He’s a great guy.”

Get more fromJoseline. Read the Rolling Out interview here. To get the latest celebrity news, fashion tips and newest music  follow us on instagram and twitter @rnbmagazine.

Hold On To Your Seats! A New Jeremih And PARTYNEXTDOOR Album Is...