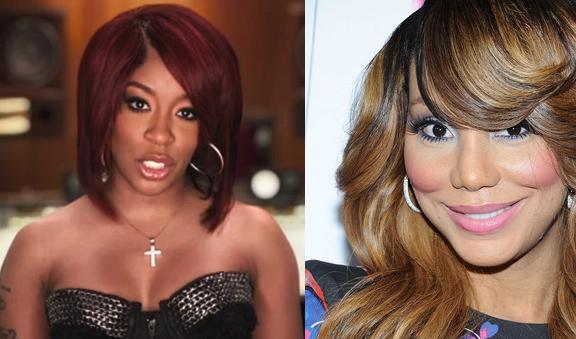 Tamar Braxton can’t win. A few weeks ago we reported a beef between the Love and Hip-Hop reality star Joseline Hernandez and the Love and War star. Today The One singer is facing another beef, this time from fellow R&B crooner and V.S.O.P singer K. Michelle.

According to The Drop:

You would think K. Michelle would be celebrating the release of her new album, ‘Rebellious Soul,’ yesterday, but nope, she decided to throw some shade at her rumored arch nemesis Tamar Braxton on Twitter.

Early Tuesday evening (Aug. 13), Tamar wrote a couple of tweets that were rumored to be directed towards K. Michelle. “Damn! I lost my wig!!!!….,” she tweeted, followed by, “#shadebutnoshade.”

Of course, K. Michelle is famous for not biting her tongue and took to her timeline and threw some heated 140 characters at Tamar.

“You didn’t lose your wig, Kermit snatched it,” she tweeted, referring that Tamar resembles Miss Piggy.

Then the ‘V.S.O.P.’ singer posted this zinger, “Rebel against muppets gone wild! No shade. Rebel against lip synching and buying ur own singles. Noshade.”

However, K. Michelle did end her tirade on a positive note, tweeting, “I’m in a positive place but I ain’t no punk!!! Dont come for a G. Now let me go to the boys and girls club and talk to the kids.”

Can we all just get along?

Tamar took the high road and didn’t engage in the Twitter beef. Instead, she posted a photo of her true love, her baby boy Logan and promoted her new LP, ‘Love and War,’ Thursday (Aug. 15) online chat with her Tamartians (aka her fans).

Twitter beefs aside, K. Michelle’s ‘Rebellious Soul.’ is in stores now, while Tamar’s ‘Love and War’ is due Sept. 3.