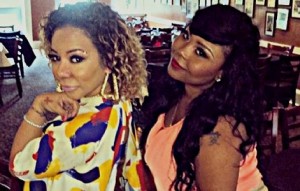 Tameka ‘Tiny’ Harris recently released a new joint “Cut It Off,” which is a remix of K Camp’s “Cut Her Off.” The track has a special guest appearance from her lively hairstylist and BFF Shekinah.

We are not sure if this is a personal message, but she is letting the world know it ain’t nothing for her to cut that meat off and go get a better piece. Tiny talks about knowing bosses in Japan that will treat her like a queen.

Shekinah and Tiny are inspiring chics to step their game up and leave them lame, wack, broke dudes alone. But ladies if you broke, then 9 times out of 10 you will attract a brok-e man. So before you sing this anthem make sure your shh on point. Check out Tiny’s new joint below.