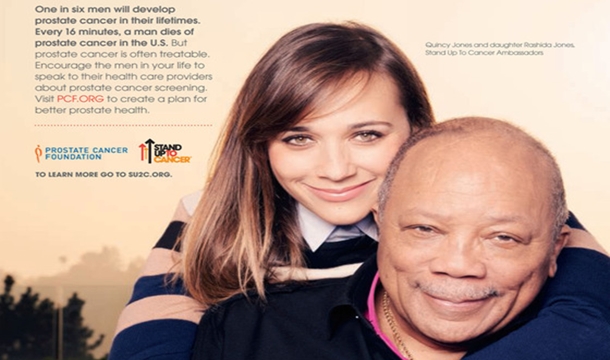 Award winning music industry icon Quincy  Jones and his daughter, Rashidah Jones (NBC’s Parks and Recreation), have teamed  up with Stand Up To Cancer to appear in a new public service  announcement.

Titled “Cherishing Life’s Special Moments,” the announcement is designed to  raise awareness about the importance of speaking with your doctor about prostate  cancer.

“Prostate cancer is the second most common cause of cancer death for men in  the United States, affecting one in six men, according to PCF. In the U.S.  alone, 2.5 million American men and their families are currently living with  prostate cancer,” reports Stand Up To Cancer.

“As a father, I cherish the special moments in life and understand how they  can fly by in an instant,” Quincy Jones offered in a statement. “Prostate cancer  has affected dear friends and family of mine, so I am honored to be part of this  campaign with Stand Up To Cancer and the Prostate Cancer Foundation to reinforce  how incredibly important it is for men to talk to their doctors about prostate  cancer.”

Selfless Snaps: Alicia Keys + J.Lo Meet Up in London Ahead of Chime for Change Concert