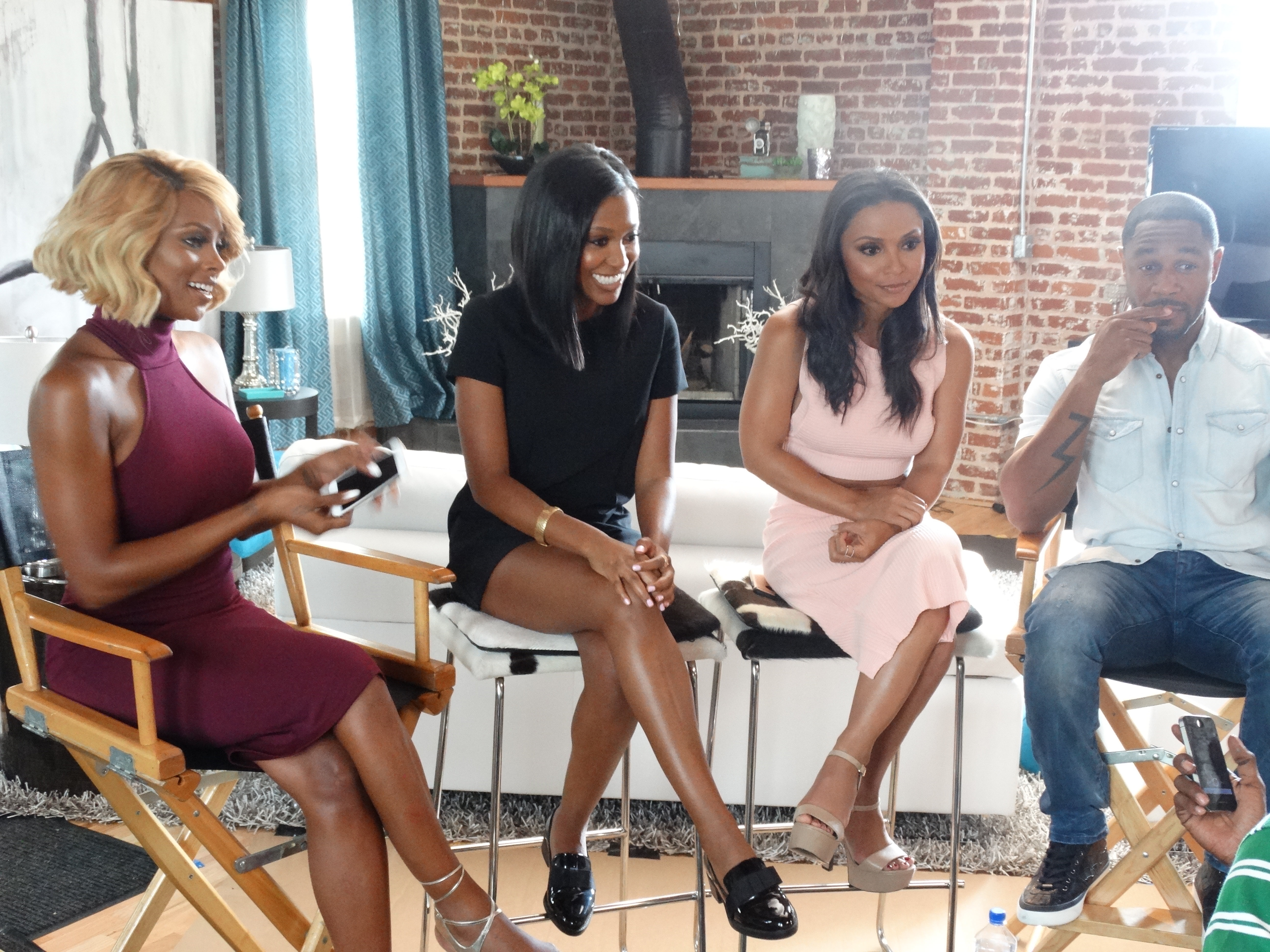 TV One’s comedy Born Again Virgin is proving to be a hit. The show stars Danielle Nicolet (Third Rock from the Sun, The Game) as Jenna, a professional blogger who after getting tired of unsuccessful dating experiences decides to become a born again virgin. Then in comes sexy new neighbor Donovan, played by Tank (singer/songwriter/producer) to heat things up! Roommates Tara (Eva Marcille, America’s Next Top Model, The Young and the Restless) and Kelly (Brely Evans, Sparkle, Just Wright) keep things fun and real.
*At the time of the interview Brely Evans was scheduled to play Kelly.  We talked one on one with the stars of the show to discuss some of the serious conversations this new comedy will generate.

Eva Marcille—On her character “Tara”, getting into trouble for a friend and the vow of celibacy
“My character is my hero, my character does what a woman wants to do but usually doesn’t have enough balls to do. Tara is every woman’s shero to the 10,000th power. She makes no apologies for who she is, and as women I think we have to be comfortable with who we are and our differences, whatever they might be and confident in those differences. That’s what makes us who we are.”

“The Born Again Virgin crew, the three of us girls, they are much like our regular lives, they are exactly like my best friends. There are actually four of us, but we are the same exact way. Now in my real life I can fight, Tera can’t fight, but she is not one to back away from a fight or trouble for her friends. A lot of times you are not guaranteed success at the end, but in the trying it really defines who you are in that moment. If you win or if you lose, it doesn’t matter, as long as you actually tried. Terra is not afraid of herself, or anyone else for that matter. Her friends are her family, they are her life, they are her man, they are her everything. So when it comes to my girls—I definitely hold it down.”

“If you’ve lived long enough, about thirty-five, every woman should have tried to be a born again virgin at least twice. We take that vow of celibacy when that love of our life breaks our heart and we are like , “Oh my God, I’m going to do the spiritual cleanse, it’s all about me and my oneness, and I’m going to work out and not have sex.” Then five months pass and you meet a new hottie and there that goes. It does work, but it is also about what you want. For Jenna that is great. I think for a woman it’s all about what she wants, forget what he wants. If what you want out of it is a more meaningful relationship, something more than just the physical, then becoming a born again virgin is a great idea! Tara, on the other hand, does not want that at all. She is like, “You love me physically first, and I need to love you the same to know if this is even going to work.”

Tank— On if he would date a born again virgin, if he thinks holding out works and working with an all female cast, “Deal breaker.”
If I can’t get it then…I didn’t know they made born again virgins. I knew you could slow down, but I didn’t know you could reclaim the hymen. But it’s a figure of speech. Really, it all comes down to how bad you want to be with someone and respecting whatever their wishes are. Obviously in this situation, Jenna is trying to reclaim her virginity, but it also has to do with her regaining control of her life and the decisions she makes. You can only respect a person for that, so if you want to be with that person, then yeah, I guess we’ll be celibate together.”

“I think there is a certain amount of respect that goes into preserving yourself as a woman, but I also feel at the same time if two consenting adults want to do something than by all means, they should do it! Any individual that’s willing to live with the consequences of his or her actions—it is what it is! I am not really judgmental as it pertains to that. There are a lot of marriages that started from a first night occurrence, so you can’t say that a woman waiting three months made a man propose earlier than the girl who gave it up the first night. That’s the truth. There has to be standards for a woman of course, which a woman is supposed to have, but we’re all grown here. I don’t judge it that way.”

“I school them on the idea of a woman. Of course they have firsthand experience in dealing with their selves, but I’ve dealt with a lot of women and I’ve come across many of young ladies, so I have insight on the female psyche as well. I give my two cents all the time, which adds up to a dollar. “

“I think people will be able to sit down and chat afterwards and see their selves in each of the characters, or want to be more like one of the characters. Like, “Oh, I wish I could be that free!” or “I wish I could close my legs!” The show creates a whole new energy around loving yourself, and it’s about three women who actually like each other. I mean we get into our little spats, but at the end of the day it’s all about love. And we, especially in our community, need a show where we are loving on each other, having a good time, being successful in our careers and really looking for the right love and not just taking anything. “

“I think it is amazing we are finally talking about taking a vow a celibacy, and what is super amazing is that in my personal life I actually am a born again virgin. Men and women are finally realizing the value of their being. It’s really all you have. Money comes and goes, clothes—all the material things we have—but your body is the only thing you really have. So why not wait for someone who has the commitment and you’re under the marriage covenant to give it away to. My friends are supportive of me, but some are like “Don’t you need a tune up yet?” I’ve had some friends join me and shut it down too. And with all this HIV and stuff going on, you can’t trust just anybody. When you are just having sex you are giving your energy away. When you stay to yourself it gives you a chance to be introspective, explore you and who you are! ”

“We know that men think differently than women. They are set up differently. But we control what really goes on, they think they know, but they don’t. If we set a standard we get treated in a different way. Since I have become a born again virgin in real life my dating pool has tripled as far as the type of men who are even attracted to me. I’m like, “Have I lost a little weight?”, “Have I gotten a little cuter?” I only say this because I am looking at their qualities, which are much better than they were before. I challenge any woman reading this—I dare you – to give it a try. And then look around. You will say, “Wow, I’m a little more successful at my career”, “Wow, bank is looking a little better.” A lot of things are hindered when we are giving ourselves away. Make these brothers work for it! You remember what mama said, “You can’t have the milk until you buy the cow!”

Danielle Nicolet–On playing “Jenna”, going against the grain of the traditional black female role in TV comedy and the difference in having all female writers.

“Jenna is a woman who has been very successful in certain aspects of her life, her career, she’s a talented writer, she’s got really amazing friendships, she’s got a lot going for her, but she just can’t seem to make a relationship happen in the long term. She thinks maybe it’s because she has been a little too indiscriminate with her sexual partners and getting herself and her energy confused. So she’s on a journey of celibacy, and she’s dragging everyone she knows with her. When this opportunity came my way to play the title character Jenna I really felt like I had to let myself be vulnerable to go ahead and be a little weird and legitimately funny in order to help people want to embrace this character on her celibacy journey. I had to let those very real parts of myself and personality come forward. Which is kind of a hard thing for an actor to do, because you spend a lot of time pretending that you’re way cooler than you actually are. “

“She doesn’t fit into any stereotype of any African-American woman that is currently on television in a comedy show. She’s adorable and sweet and well intended and fun and she is entirely not dependant on a male character in order to be interesting or of value. We almost always fall to the category of desexualized mom or grandma, sassy nurse, sassy mom, and a favorite- the disappearing wife. You have a wife in a few scenes of everything and they have kids, and the man actually has stuff going on and he is motivated to do this stuff, but no one actually cares how it affects her. We always tend to fall into those same categories, particularly in comedy. It is a little different in drama, but in comedy—come on –black girls are adorable too! We can be adorable on TV.”

“I know that Jenna is reflected in most of my friends, and the rest are in the other two girls in the show. I really feel like those kinds of fun, light female aspects, like we all have as black women, never get shown on TV. Until now. We still barely get to be light-hearted and fun. We only get to be fun and light-hearted if we are also desexualized at the same time. Like everybody’s got to be a good God-fearing woman that would never go to a club. Or that the women are only valued if a man is committed to them. These girls are the opposite and reflective of everyone I hang out with. It is actually written by women. We don’t have a single male writer. I think a lot of what we see on TV, particularly comedy ,when we see African American women, they are written by men and what they think we want to hear out of each other—and it’s not! It’s what men want to imagine women say to each other when they aren’t around. And we also don’t wear that much make-up when they are not around either.”

Tamar Braxton Guest Stars In An All New Episode of ‘In The Cut’ Airing Tonight, July 25th at 9:00 p.m. ET/PT on Bounce

Fans are Convinced Beyoncé is Contributing to the Black Panther Soundtrack