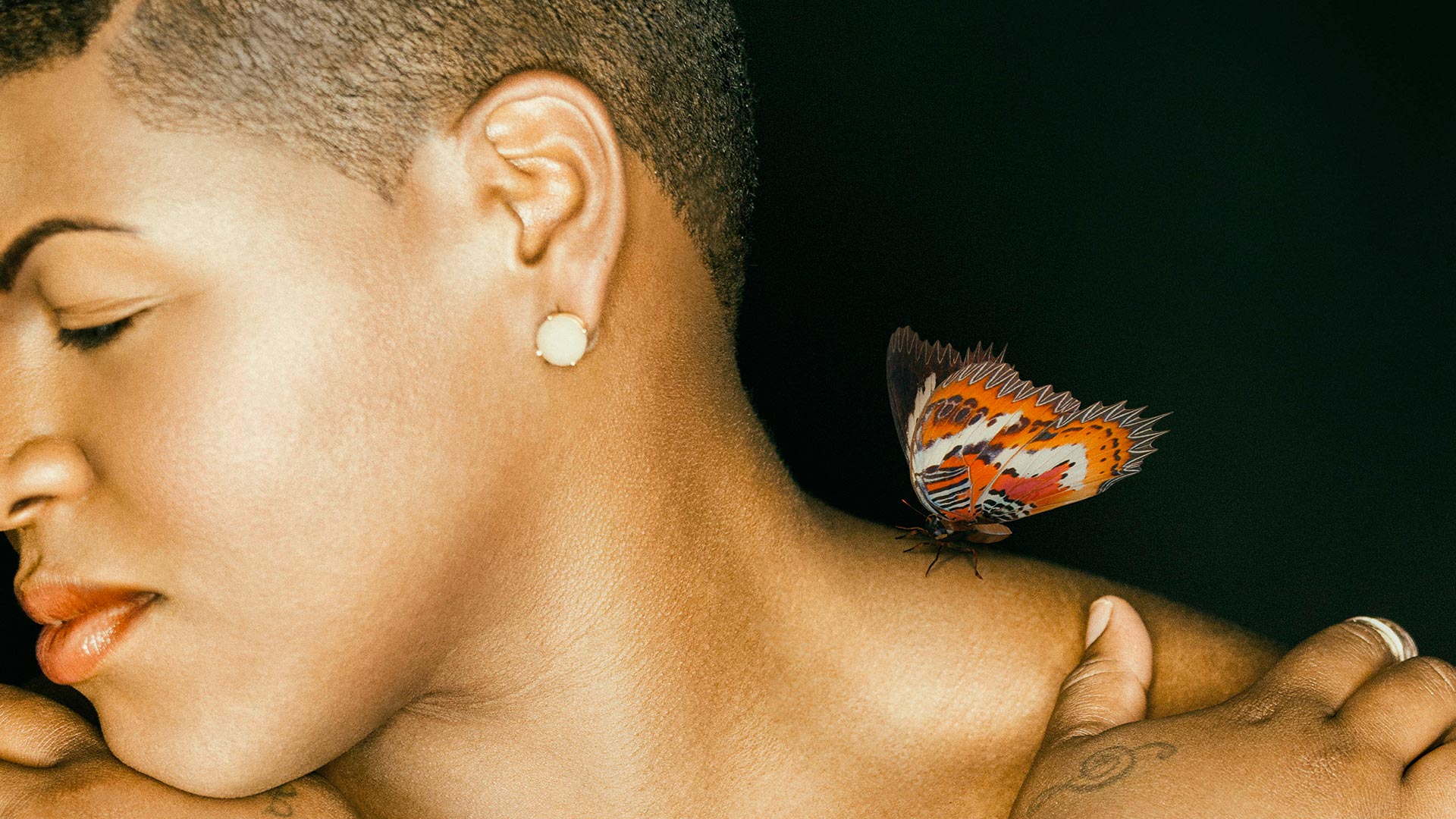 Stacy Barthe, the amazing Grammy-nominated songwriter for people such as Kate Perry, Rhianna and Miley Cirus, talks about her own newly released and deeply personal album, BEcoming.  Common and John Legend are featured on the album and John Legend is executive producer. The album is a powerful confession, a testimony, painful at times and uplifting at others.  The album from beginning to end is a journey as Stacy is open and candid through her music about her struggles with drinking too heavy, a suicide attempt and accepting her body image, but then joyfully the songs turn to finding self-love and self-worth.

Q. “When you are writing a song for yourself, especially about personal experiences, does it come from a deeper place within than where you go when you have written songs for others?”

A. “I’m completely transparent, but when you’re writing for other people you kind of want to tell their story. So when I write for other people I don’t necessarily try to force my deepness onto them. I write a song that they love, that they will feel like, “oh, this is me.”  Like when I did Cheers for Rhianna, she was like, “I felt like whoever wrote this knew me.” So it was tailored for her.”

A. “I’m like a method actor and method artist. I basically live or create situations for myself so I can be inspired to write. When things are going too good, I self-sabotage. I write when I’m inspired. When I come up with something I love, I just go do it. When I’m not writing songs I’m writing plays and short scripts and poetry and painting and stuff. Music is just 1/16th of everything that I do.”

Q. “The album is a confession and a powerful story of transformation, I imagine it is empowering to get it down and out. How does it feel for you to send this deeply personal album out into the world for others to know?”

A. “I wasn’t really thinking about anybody when I did this album, it was more cathartic for me. I knew that people would relate because there’s issues, especially in the black community, that we don’t address, like depression, addiction…those are issues that are swept under the rug. So in my transparency I knew that I would help other people face themselves.  I’m not ashamed to talk about anything that’s helping others. It’s the past.”

Q. “The suicide attempt  seems like it was a point where you had to break yourself down and find or reinvent yourself, if you were advising someone on how to do this, reclaim or rebuild themselves so to speak–how do you take on something like that? “

A. “It’s a journey, things weren’t…one thing came after another. From not wanting to live, to making it, now I have a second chance. So everything doesn’t become clear until the next. It’s a continual process, so my advice would be to just wake up every day and just figure it out from where you are then.”

Q. “What kept you on track with the weight loss? What would you say is key in setting a difficult goal and actually making a lot of progress? “

A. “Once you find the why, then you can find the how. Every addiction is rooted to some sort of coping or filling a void. Whether it is alcohol, sex, drugs or food we are using it in order to ease something we’re not happy with. I feel like whoever we are as adults is a direct effect from our formative years and all the insecurities and all the doubtfulness and negativity that we feel about ourselves is composed by our sub-conscious. That’s the mind that was created because of the experiences and the shit that we was told. So once you get to the why you can follow through the path. You change your mind, you change your life.”

Q. “Is it hard being in the lime light and attending so many events, where I am sure alcohol is flowing freely, is it uncomfortable or have you adjusted into just not going there?”

A. “I’m still working on it as far as that’s concerned. I definitely drink a lot less than I used to. It’s finding balance. It’s not saying I’ll never have a drink again, it’s saying everything in moderation. I’ll get to a place eventually where I’m just like,”OK, I’m done.” Probably when I‘m pregnant. That will be my first official time, you know, in a relationship and I know I’m gonna get pregnant.”

Q. “Do you think if you had a white picket fence life growing up and into adulthood, like cheerleader, prom queen, the whole thing– where do you think you would be as an artist today?”

A. “Probably really bored. Everything I’m not, makes me everything I am. I really feel like it is pre-written, the person you’re supposed to be is what it is, and God is the director. All of this had to happen, so this could happen, and the next thing could happen. It’s all in the alignment. So the choices that we feel like we’re making on our own, that was actually already written. God already said this is how it’s going to go. That’s what I believe. “

Q. “What do you think makes your sound stand out a little differently from other music out? What are you listening to that’s out there?”

A. “I don’t really know. I don’t really listen to what’s going on. Well, there have been a few things that have caught my ear, but I have never been able to impersonate anybody so what I give musically is genuinely who I am in person. I guess it could be influence. I am a big fan of jazz, country, rock, hip hop, world music, reggae, Brazilian, Caribbean… I’m a citizen of the world. That’s what my music is, it‘s not genre specific, it’s not like typical R&B. People categorize me as R&B because I ‘m black, but it’s world music. Like if you never saw me you and just heard me, you might think I’m white. What am I listening to now…Biggie, Lauryn Hill, Missy, Alanis Morissette, Bob Dylan, Bob Marley, Sade, Red Hot Chili Peppers,… I listen to all music.  I have always been a fan of anything of any genre that was amazing.”

Q. “What is something else that you think makes you stand out a little differently than other musicians on the scene right now? “

A. “I think somewhere along the line artists became  about making money, and so my philosophy is  I don’t try to acquire things or I don’t do this because I want to be rich or whatever. I do it because I have no choice. I’m gonna die and leave whatever I acquire here anyway, so the only thing that is going to live forever is what I left behind.  And it’s not just music,  it’s therapy for people, it’s something that’s going to live way past me and my generation.”

Q. “How long has music played an important role in your life?”

A. ” Since I was like six. That was my first recollection. We had just got cable, it was 1991, and the video station showed TLC and Brandy, and it looked like so much fun. Whatever came on the TV and whatever came on the radio I would have to wait for the songs to come back on. My mom wasn’t into it, they were foreigners, they really didn’t listen to it. So I figured it out myself by whoever was in the neighborhood driving around bumpin.”

Q. “What does your mom think of your music and the new album?”

A. “I didn’t think she was going to listen as intently as she did. We definitely had a conversation about it.  She was like, “You were what?”  I was like, “Yeah, baby.”  And so she is proud, but she’s like, “I didn’t know you were going through all that.” You know, she is across the country, and with her being in New York and me in LA I didn’t want to worry her. My mom is the type to get on a plane today and be at my door tonight. “

Q. “Is there someone special in your life?”

A. ” I’m seeing myself right now. Getting to know myself again. Getting reacquainted.  But one day…I think I was born to be a mom. I look forward to whenever that time is. To take care of someone, to do for others. If it’s just me I’m like whatever, but if there is someone else… something about that sense of being needed. You go the extra mile.”

Q. “Is it sometimes hard to sing some of the songs from the album, does it ever take you back to a dark place or is it uplifting and positive now, like you aren’t there anymore? What do you want others to get from that experience as well?”

A. “Sometimes. I just have to figure out a way to differently internalize it. Like those places, I ‘m not there anymore. But it gets hard sometimes.I just hope my transparency forces people into a space with themselves where they can face themselves.”

Top 10 Health and Fitness Mobile Apps You Must Try

Kanye West The Only Guest On The Weeknd’s New Album?

How Do You Leave the Friend Zone?