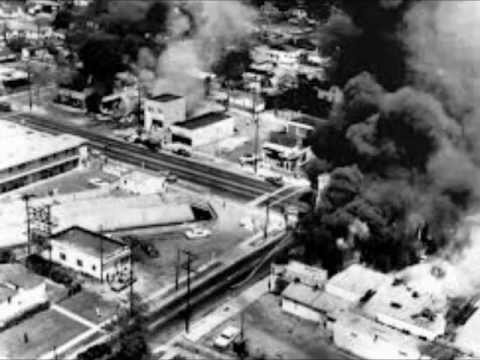 It isn’t Black History Month but today marks history for African Americans. 50 years ago today the Watts riots took place in the heart of Los Angeles-the place us west siders like to call home.

On August 11, 1965, 21 year old Marquette Frye was riding through LA when he was pulled over for reckless driving by the CHP (California Highway Patrol). After given a sobriety test, his brother, who was also in the car, walked home to inform their mother of the events. When she arrived to the scene, arguing ensued. Arguing led to a physical altercation and before they knew it, Frye was being arrested by officers who used excessive force to subdue him. A rumor was spread that his (Frye’s) mother and pregnant girlfriend were struck during the altercation.

When the community heard of the altercation, they responded-quickly. An abundance of people took matters in their own hands throwing objects at officers and shouting derogatory things. After the arrests of Frye and his brother things escalated violently. For the next six days, Watts transformed into a scene off of an army movie.

During the time where LA was poverty stricken and a good number of Blacks and Latinos were being raised in cities where there were no job opportunities and affordable housing, they also dealt with the crimes of the streets, drugs and violence. Police brutality and racial profiling definitely played a major role in the impetuous actions of the rioters.

With the release of the NWA movie that hits theatres this Friday August 14th, has everyone thinking “when will we see a movie illustrating the Watts riots?” I think it’s about that time!

When Ice Cube and his then group NWA brought light to the issue of police brutality with their 1988 hit ”F**k The Police” which kindled fire to the already contentious topic, it fueled LA to respond.

Now almost twenty seven years later, many of us are visually able to see how the triumph that took place between our neighborhood and the police.