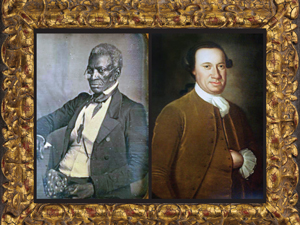 Since the beginning of time people have been told many myths such as the look of Jesus, to Lincoln helping the slaves, and those savage Africans and Indians. Some people may feel history lies for personal gain over the masses. There is a saying “To get respect, you have to give respect.”  So how can one show respect and honesty to their neighbor, when their neighbor is constantly displaying deceit? This brings us to the legendary myth over John Hanson’s nationality.

Who is John Hanson one may ask? John Hanson was a merchant from Maryland. He became a leader at the 1780 Continental Congress held in Philadelphia. Representatives from all of the colonies assembled to form some organization to protect their interest. The Continental Congress formed the Article of Confederation; they only allowed a President to serve one year term during any three periods.

John was elected as the first president under the Article of Confederation. This took place after the Revolutionary War. Hanson was known for creating the Great Seal of the United States. He established the 1st Treasury Department, the 1st Foreign Affairs, and the 1st Secretary of War. John’s most memorable attribute was declaring the fourth Thursday in November as Thanksgiving Day.

There was another influential man named John Hanson around the same time. John Hanson was a politician from the Africa nation of Liberia. This Liberian was notable for his involvement in the resettlement of former slaves in Africa.

During this time it was uncommon for a black man to hold such a high position, but could the Liberian Hanson use his wit to earn a spot amongst the founding fathers?

Hanson’s accomplished a lot during his term as president. He held the country together during a devastating time in history. Six other presidents were elected after him, Elias Boudinot (1783), Thomas Mifflin (1784), Richard Harry Lee (1785), Nathan Gorman (1786), Arthur St. Clair (1787) and Cyrus Grifflin (1788). The Article of Confederation didn’t work out well because individual states had too much power and nothing could be resolved. Ten years later the United State Constitution was formed.

An artist drew a depiction of the Signing of the Declaration of Independence in 1776. Some say the artist drew a darker skinned man in John Hanson’s position. Others argue, that was John Hanson at the signing, but he’s white and not a black man.

Ironically there’s not a lot of information on either of the Hanson’s, since some historians can elect to choose what goes into history and what doesn’t. Could this be a case of mistaken identity or stolen identity? Take a look at the back of the $2 bill and you decide.

Technically under the Constitution established in 1788 President Barak Obama is considered the 1st black president.