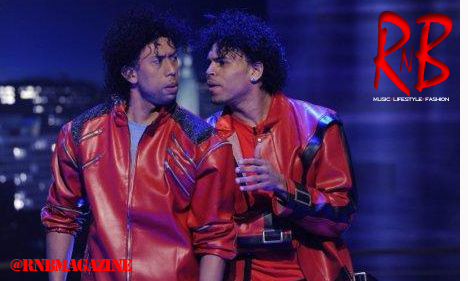 Hip-hop impressionist Affion Crockett continues to make headlines by challenging guest Chris Brown to a “Michael Off” on the second episode of his Fox sketch comedy show, ‘In the Flow With Affion Crockett,’ which aired on Sunday night (Aug. 21).

Rocking his best ‘Thriller’ leather and Jheri curl, Crockett attempted his own version of Michael Jackson’s signature dance moves, including, of course, the moonwalk, but was showed up by Breezy’s much smoother maneuvers.
“They told me I was supposed to do it, they paid me for the day,” the crooner deadpanned in response to the comedian’s mock surprise at his entrance. “I got a voicemail from you saying you wanted me to come and do this!” Imitating Michael’s silky falsetto, Breezy continued to admonish Crockett, “It’s nothin’! You ain’t bad. You’re not bad! I’m badder. Badder!”  Despite his comical attempts, the comedian’s moves were no match for Brown’s fluid steps.

“Give it up for Chris Brown, he just whupped my ass in a Michael Jackson battle,” Crockett ultimately conceded. Interesting choice of words. Crockett also recently impersonated Jay-Z in an advertisement for the superstar rapper’s Rocawear clothing line.

‘In the Flow With Affion Crockett’ airs Sundays on Fox at 9PM ET.

Meanwhile, Brown has announced that he will be embarking on a 28-date U.S. tour with Kelly Rowland, T-Pain and Tyga this fall.

Will And Jada Breakup?