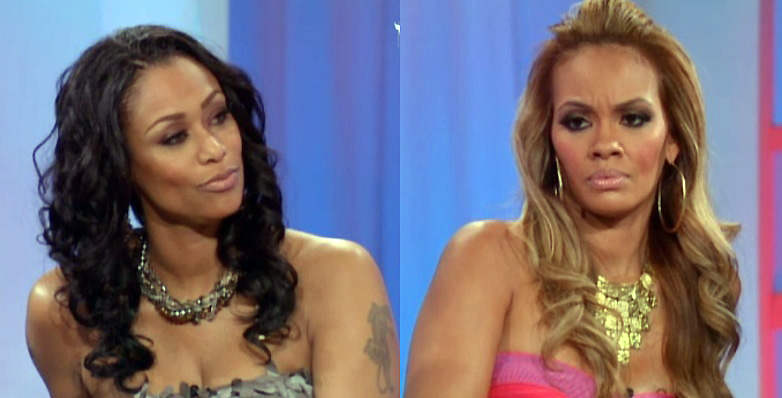 We can expect Evelyn Lozada not to be chatting, and hanging out with Tami Roman or Tasha Marbury after this season of “Basketball Wives.”

The VH1 star confirmed that she and Tami are on the outs and she’s “choosing to leave her alone.” Things were a little rocky between the two at the beginning of the season, and their friendship continued to dissolve after Evelyn called Tami the b-word during a cast dinner.

Although they seemed to be getting over their differences as the season has progressed, Evelyn confirmed that she and Tami have indeed fallen out with one another.

“We don’t speak, we don’t text, we don’t talk,” Evelyn told GlobalGrind.com of her relationship with Tami.

“I don’t have anything negative to say about her, she’s just not someone I choose to have in my life.  As far as a friendship, she’s not necessarily someone I would want to be my friend.”

Things aren’t looking so great between Evelyn and Tasha Marbury, either, these days.   “We don’t really talk, ” Evelyn revealed. The old friends have been butting heads quite a bit this season as Evelyn used Tasha’s marital strife as part of the plot for her book The Inner Circle, when she wrote about a pro-athlete cheating on his wife with their chef.

Evelyn believed that Tasha’s drama was fair game, but she thinks that Tasha making a joke about her getting head-butted by her ex-husband was definitely crossing a line.

“If she would have never signed on to do the show, no one would have ever known that that story was their story,” Evelyn argued. “I just kept it real. I just kind of feel, you know, you use it as a storyline but then you act like you’re so upset about it. It’s just a little crazy to me.”

Do you think Evelyn and Tami will be back friends?  Make sure you follow us on Twitter @rnbmagazine and tell us what you think.

Prince is Throwing a Pajama Party for Fans

Astonishing reasons why black women don’t date outside of their race.

SZA’s Dad Brought to Tears While Listening to “Broken Clocks”