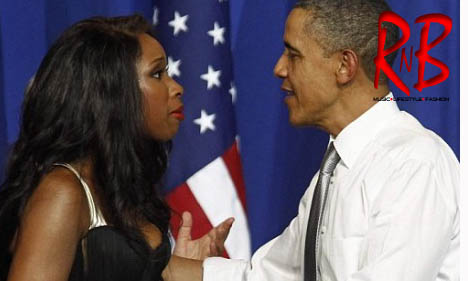 President Barack Obama turns 50 today! And he got serenaded by a movie star songbird. Wait … that part sounds familiar.

On May 19, 1962, President John F. Kennedy celebrated his 45th birthday at NYC’s Madison Square Garden with 15,000 of his closest friends. Many celebrities were in attendance at the celebration, including Marilyn Monroe, who … um … might have known the president pretty well (according to some people).

Wearing a sheer, rhinestone-studded dress (which sold at auction in 1999 for $1.26 million), Monroe’s take on “Happy Birthday” was a sultry showstopper. After the performance, President Kennedy told the crowd, “I can now retire from politics after having had Happy Birthday sung to me in such a sweet, wholesome way.”

Jennifer Hudson’s performance for Obama was markedly less scandalous. Wearing a short black dress, the Oscar-winning actress took the stage in Chicago at a fundraising event. (Wait … Obama held a fundraiser on his birthday? This guy’s all business! Someone get him a cigarette or something.) We suppose she did sex things up a little bit by standing next to fire-tempered silver fox Rahm Emanuel to lead the sing-a-long. But that’s it. Nothing crazy here. As usual, things were dignified and professional. (Boring!)

Compare Monroe’s famous serenade of Kennedy to Hudson’s group sing for Obama after the jump.

Beyoncé – Best Thing I Never Had

Ne-Yo is planning to drop a mixtape

Joe – I’d Rather Have a Love