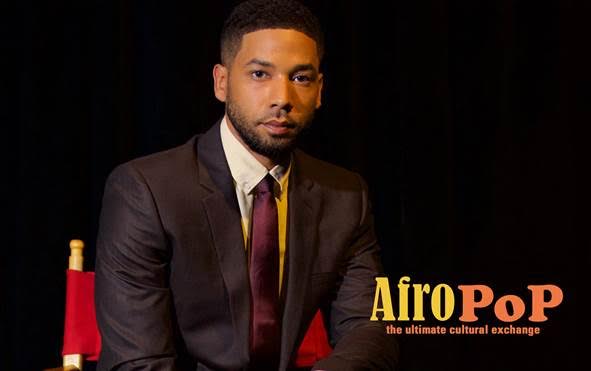 Jussie Smollett will host the eighth season of the public television show AfroPoP: The Ultimate Exchange. The star of the hit FOX TV show Empire will emcee the popular show about contemporary art, life and culture across the African Diaspora as it premieres on Martin Luther King, Jr. Day, Monday, January 18, at 8 p.m. ET/5 p.m. PT on WORLD Channel. New episodes premiere weekly through February 15. AfroPoP is produced by National Black Programming Consortium (NBPC) and co-presented by American Public Television (APT), which distributes the series to the full public television system in February 2016.

The breakout star of Empire, Lee Daniels and Danny Strong’s record-breaking series, Smollett plays Jamal Lyons, drawing raves for his musical performances. The talented actor-singer-songwriter has appeared in The Mighty Ducks, Rob Reiner’s North, Alex Haley’s Queen, and in Revenge and The Mindy Project. Smollett will also be seen in the new WGN thriller Underground in 2016. The acclaimed entertainer is also involved in numerous humanitarian pursuits, sitting on the boards of the Black AIDS Institute, Artists for a New South Africa and the RuJohn Foundation.

“AfroPoP’s engaging, real-life tales add to the collection of rich Black stories that audiences are clamoring for and I wanted to be a part of bringing them to national attention,” said Smollett.

“Jussie is an immense talent with a huge heart and a global perspective on issues, making him the perfect choice as host of the series,” said NBPC Director of Programs and Acquisitions and AfroPoP Executive Producer Kay Shaw. “The range and diversity of the content presented appeared to have really resonated with him and he was an informed host, contributing his knowledge of the issues addressed in the documentaries.”

The five-week series takes viewers on a journey of hope through three continents and the Caribbean. Episodes include:

Director Ditte Haarløv Johnsen’s Days of Hope (January 18), a nuanced look at the unflinching courage of three West African migrants who cross the Sahara desert and Atlantic Ocean in a search for opportunity and safety in Europe. The timely documentary, given current headlines about immigration and refugees, follows the brave souls as they hope for a better life for themselves and their families. Will they find a dream or encounter a nightmare?

Directors Jérôme Guiot and Thierry Teston’s Pan! Our Music Odyssey (January 25), a joyful celebration of the melodious steel drum. The film explores the magical instrument from its development in Trinidad to its celebration around the world, as bands from across the globe gather to compete in the ultimate steel band competition: Panorama.

Pablo García Pérez de Lara and Marc Serena’s Tchindas (February 1), which transports viewers to São Vicente in Cape Verde. There we meet Tchinda, a transgender woman who is so cherished that her name has become synonymous with LBGT people in the area. The documentary follows the celebrated character, out and proud since 1998, as she and her cohorts prepare for the beloved annual carnival.

N’Jeri Eaton and Mario Furloni’s First Friday (February 8), which heads to Oakland, California—a city with a reputation as one of the most dangerous in America—as it works to rebrand itself through its successful First Fridays monthly street festival. The murder of a young Black man sends the city reeling, threatening the very survival of this community celebration and, perhaps, the town’s very renaissance.

A shorts program (February 15) celebrating youth and the hope they both possess and inspire—with films from the west and east coasts of Africa. Nosarieme Garrick’s My Africa Is, set in the bustling, modern city of Nairobi, introduces viewers to dynamic youth envisioning a new Kenya—designers, inventors and musicians changing the face of their communities through innovation and entrepreneurship. Terence Nance and Blitz the Ambassador’s Native Sun helps viewers see Ghana through the eyes and dreams of an eight-year-old in search of his father.

AfroPoP: The Ultimate Cultural Exchange is produced by Angela Tucker and directed by Duana Butler. The series is produced with the generous support of the Corporation for Public Broadcasting and National Endowment for the Arts.

For details on AfroPoP, visit www.blackpublicmedia.org. Viewers may find out when and where to watch, including additional air dates for each of the episodes, by checking local listings or online at www.APTonline.org.

Jussie Smollett stars as Jamal Lyon on the hit series Empire from producer/director Lee Daniels. His role allows him to blend his acting, singing and songwriting skills in the high-octane family drama, which is a historic hit on FOX. Smollett’s feature film credits include The Mighty Ducks, Rob Reiner’s North, and Alex Haley’s Queen (alongside Halle Berry and Danny Glover). He also appeared in the telefilm A Little Piece of Heaven, opposite Cloris Leachman, and starred with his five real-life siblings in the network comedy On Our Own. Smollett recently appeared on Revenge and The Mindy Project, and was seen in the independent film Ask Me Anything. He received rave reviews for his portrayal of Magnus, a gay medical student hosting his college friends in New York City, in the 2012 film The Skinny.
Smollett will next be seen in the new WGN thriller Underground in 2016 and he is currently recording his album, described as a mix of pop and soul with alternative hip-hop beats.

The National Black Programming Consortium (NBPC) is committed to enriching our democracy by educating, enlightening, empowering and engaging the American public. We support diverse voices by developing, producing and distributing innovative media about the Black experience and by investing in visionary content makers. NBPC provides quality content for public media outlets, including, among others, PBS and PBS.org and BlackPublicMedia.org, as well as other platforms, while training and mentoring the next generation of Black filmmakers. Founded in 1979, NBPC produces the AfroPoP: The Ultimate Cultural Exchange documentary series and manages NBPC 360, a funding and training initiative designed to accelerate the production of important Black serial and interactive content.

The WORLD Channel delivers the best of public television’s nonfiction, news and documentary programing to US audiences through local public television stations and streaming online at worldchannel.org. WORLD reached 35.8 million unique viewers 18+ last year (55% adults 18-49) and over-indexes in key diversity demographics.* Online, the WORLD Channel expands on broadcast topics and fuels dialogue across social media, providing opportunities for broad and diverse audience interaction (*Source: Nielsen Local Buyer Reach Scorecard 01/14-12/14). WORLD is programmed by WGBH/Boston, in partnership with American Public Television and WNET/New York, and in association with the American Public Television and National Educational Telecommunications Association. Funding for the WORLD Channel is provided by the Corporation for Public Broadcasting and the Ford Foundation. Additional funding for America ReFramed is provided by the MacArthur Foundation.

Does Your Man Hate to Dress Up? Tips To Keep Him Looking Good From The Holiday Work Party To New Year’s Eve

Chile…Vivica A. Fox Insinuates That 50 Cent is Suspect & He Clapbacks