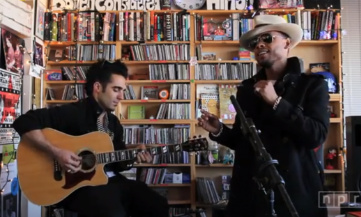 Miguel paid a visit to the NPR Music offices recently and performed a mini set for their “Tiny Desk Concert” series. The singer-songwriter performed “Do You…,” “The Thrill” and “Adorn.” Read their description and watch the performance below.

Miguel turned up in the NPR Music offices early one morning, after playing a show late the night before. He appeared light and calm, and betrayed no hint that he was nervous about stripping his highly produced hits down to their bones. Accompanied by just his guitarist, Dru DeCaro, Miguel eschewed flash and went big on small gestures — ingratiating ad libs, only one full spin and voice control that kept the songs close to his chest but emotive enough to translate to the back of the room. He told us he wrote his Grammy-nominated song “Adorn” with no idea that it would take him to our tiny stage. But he was made for it. His style was compact and graceful, his manner self-aware and open

Don’t Be His Rebound

One Church LA and BET Join Forces To Launch Celebration of Gospel...

Omarion Talks About His Experience With Young Money