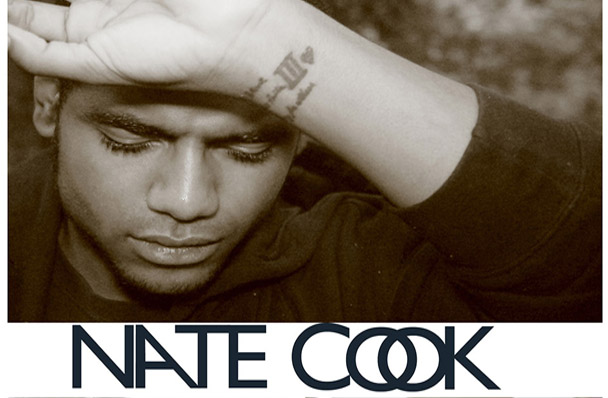 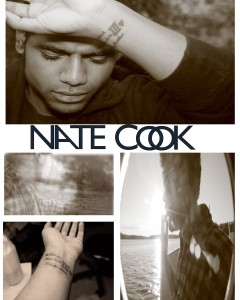 If there was a word that would best describe the complex simplicity that describes the artist from Fraser, MI. (just outside of Detroit) known as NATE COOK. It would be  Intensity. Everything about the songwriter/ singer/ producer  soon to be  hit maker exudes it. Don’t let the smooth vocals and tortured artist look fool you. The brother has a lot on his mind and knows how to relay the message in a way that gets his point across while making you groove. And its within those grooves that his story grabs and holds you or lullaby’s you into his trance. Born in Pontiac, MI. and later locating to Fraser, Nathaniel Cook III once harbored Tony Hawk aspirations as a professional skateboarder as well as  grid iron dreams of being in the NFL.  All along music was there waiting like a faithful partner while he flirted and experimented with what he thought was his calling. “I thought I wanted to play football as a kid, then I wanted to be a writer. All the while I had always been drawn to music. I thought I wanted to pursue skateboarding later on. In my 6 years of taking skating seriously, I was growing up and listening to a lot more music that also which provided me with a soundtrack if you will, to my life. When I slowly began to phase out of skateboarding, I had to fill the void and I couldn’t play on a football team and found it nearly impossible to sit down and write anything.  This is killing me for real. Music was just kinda there always and everything just kindafell into place when i needed to put my skill/energy to something else after having nothing to do physically.”, says the 22 year old artist who no doubt will bring to mind an unabashed comparison to uber artist, Drake. Also known for being able to flawlessly combine A fluid singing vocal, with a convincing rap delivery all while being authentic at both. Not too mention their uncanny semi resemblance. NATE COOK’s thoughts on the obvious comparison, “I dont listen to his music. I think he’s the man. I hear his music. I’ve heard his music. But,  I don’t listen. No Drake influence over here. All of the music Ilisten to is older. I get my overall vibe from like a mix of late 80’s/90’s/early 2k rock/blues/r&b/alternative.”

What he does possess, is a vocal that is very reminiscent of 80’s Pop/ Jazz vocalists Donald Fagen and Michael Franks that lends to the ethereal coolness of his delivery. Along with contemporary subject matter, he appeals to a wide range of listeneres without trying. He touches a bevy of genres from Neo Soul, to Jazz, to Alternative, To Obviously Soul ,  Hip Hop, Pop & Dance. But its is all weaved beautifully into one cohesive  package of just good music. He has even been compared to the likes of fellow Michigander, Motown artist KEM for his smooth delivery. To that  NATE replies, “Thats dope for real.  Those are the type of comparisons I value.” When asked of his own tastes in music , “I like  Everything. My taste in music ranges from Ben Gibbard to 2pac and I do not listen to any of todays artists. Not to be cool or sound like a hipster.  But I  just don’t want to be subconsciously influenced by anything out today. Anything I’m potentially at competition with. Because you will create what you hear just as you are a product of your environment. I have no idea what to call what I make, new? Hopefully .(Lol). And I definitely respect artists from today, But,  I  honestly just like MUSIC.  I just dont really have a favorite. Plenty of dislikes, but I’m truthfully far too indecisive for a “favorite” anything .”
One listen to his EP “#LETTERS” will no question put to rest any comparisons at least while your grooving. On cuts like the opening“(Misplaced )Letters”, “K.O.D (Like a Dancer)”, “High” and “Caught in the Life”, he displays an adeptness to not only smooth vocals, but a more than adequate wordplay & delivery alternating betweeen singing and rap verses. But, it is the breezy single “DONNA” that sets the table and the bar for those who follow as well as those already in the game to step it up. On it he lyrically asks his lady to come and save him “like a letter in a bottle”.  All while riding a pulsating pseudo euro groove and earthy chord / string  arrangement   that provides a lush  movement of sound.  What does the future hold for NATE COOK, “I’m eager to finish another  project to be called “#TheAftee”. So that Ican help my team produce a better sound as a whole. I can see myself putting together a little label if ever given the opp. Only after having already accomplished some personal goals. And closing with the words that the artist has immortalized on the wrist of  his gifted hands, Be Patient. Have Faith. Pray for others. . While you groove

Miguel Just Wants The Simple Things And With The Help Of Chris...