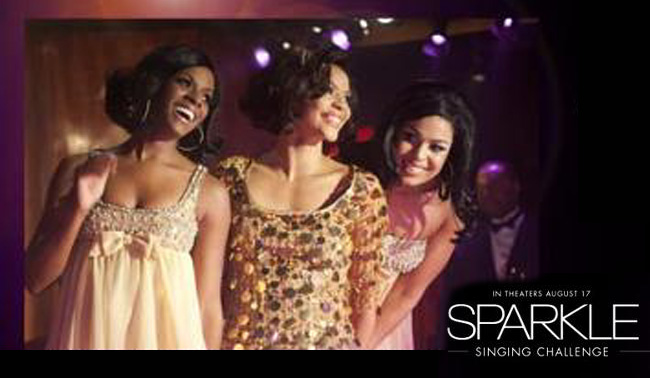 July 26, 2012 – Starting today, Myspace and Sony Pictures will open online voting to their National SPARKLE Singing Challenge competition. Sponsored by Sony Pictures and Myspace on behalf of the new movie Sparkle, the National SPARKLE Singing Challenge was held in 15 selected cities on July 14. In each city, a panel of local celebrity judges selected a winner based on their performance of a 60-second a capella version of either “Celebrate” or “Something He Can Feel,” both songs featured in the film.

Online voting will take place at www.myspace.com/sparkle and www.bet.com/sparkle now through August 1 at 3pm EST.  The grand prize winner will travel to New York for an appearance on BET’s 106&Park on August 16, the day before the film Sparkle starring Whitney Houston and Jordin Sparks arrives in theaters nationwide.  In addition, the winner will record a song with production and writing team the Punch Monkeys during their stay and receive a future Myspace homepage feature.

Video clips from each finalist from the 15 audition cities are now up on the Myspace Sparkle page, where you can vote for who you think should be the grand prize winner.

Miguel Covers Daniel Caesar’s “Get You” For Spotify Sessions

Chris Brown Talks All Things Rihanna: The Assault, Their Relationship, Drake and...

Watch Christina Milian Get Her Sexy On In New Music Video “Do...