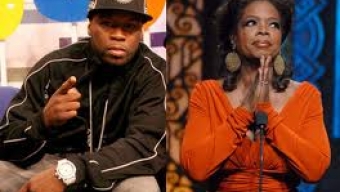 For years the hip-hop community has felt that Oprah Winfrey dislikes their genre of music because until 2010 Oprah had never had a hip-hop artist on her show, The Oprah Winfrey Show, and even had a “rapper ban” put into place. This alleged ban had many rappers up in arms, including Ludacris, who says the only time he was on her show was because he was a cast member for the movie ‘Crash’. And even then, he was not originally suppose to go on the show. He was called the night before saying that he was allowed to appear. When asked about his appearance on the show, Ludacris says, “she edited out a lot of my comments while keeping her own in.  Of course, it’s her show, but we were doing a show on racial discrimination, and she gave me a hard time as a rapper, when I came on there as an actor.  Initially, I wasn’t even invited on the show, and they called the night before to tell me I could be on”. Ice Cube is another rapper that has been disgruntled about the cold shoulder Oprah gives the hip-hop community. He has tried to go on Oprah’s show several times to promote different projects and never got the green light to come on. Ice Cube once told FHM Magazine, ” I’ve been involved in three projects pitched to her, but I’ve never been asked to participate on her show.  Maybe she’s got a problem with hip-hop. She’s had damn rapists, child molesters, and lying authors on her show. And if I’m not a rags-to-riches story for her, who is?” The rapper who is probably more notable for his issues with Winfrey is 50 Cent. When 50 Cent went on the talk show ‘The View’, he told the ladies he named his dog Oprah. His dog has its own twitter account and in the bio it says ” Oprah Winfree, 50 Cent’s Bitch”. 50 Cent’s dislike for Oprah, even though he had never met her, is the reasoning behind the pet’s name.

Oprah has tried to defend herself on numerous occasions, saying that she does enjoy rap music. She’s said, “I listen to some hip-hop. You know, I’ve been accused of not liking hip-hop, and that’s just not true. I got a little 50 Cent on my iPod. I really do. “Love In Da Club” love that, and you know, love Jay-Z, love Kanye, love Mary J”. As stated before the “rapper ban” was not lifted until 2010 when Winfrey had hip-hop mogul Jay-Z on the show. And now Oprah has broadened her horizons a step further by having another mogul, who is worth well over $200 million, on her show ‘Oprah’s Next Chapter’ on her OWN cable network. None other than……..”Fiddy”!

In this two-hour interview, which will show in two different installments, Oprah and 50 talked about 50’s childhood, his upbringing, his music career, love, fatherhood and his spirituality. The interview took place at 50 Cent’s grandmother’s home, where he enlightened Oprah that he was raised to never use curse words in his grandmother’s house, and to this day he honors those rules. Now that both moguls have met each other, 50 has a whole new prospective on Oprah and actually loves her as a person. It is safe to say the beef has officially been squashed.  Sources say that Oprah felt very comfortable during the interview and has even said she’s glad she did it. On her website blog Oprah reflected on her 5 favorite things about the interview:

3. He was not allowed to use curse words in his grandmother’s house and still follows that rule.

4. A recent conversation with philanthropist Ray Chambers was life changing for him.

5. He believes either pray or worry…no need for both.

The first part of the interview will air on Sunday, June 10 at 9 PM/EST. On this episode of ‘Oprah’s Next Chapter’ you will also see an interview Oprah does with King of Pop Michael Jackson’s daughter Paris Jackson. Be sure to tune in!

For more news or gossip on your favorite celebs, go to www.btchpleez.com!

Beyoncé – Best Thing I Never Had

Tis’ the Season for Giving Back– Focus on Pools of Hope, A...

TERRENCE HOWARD My Wife Is LYING — I Never Threatened to Kill...

7 Accessories that Will Make Your Look Pop!