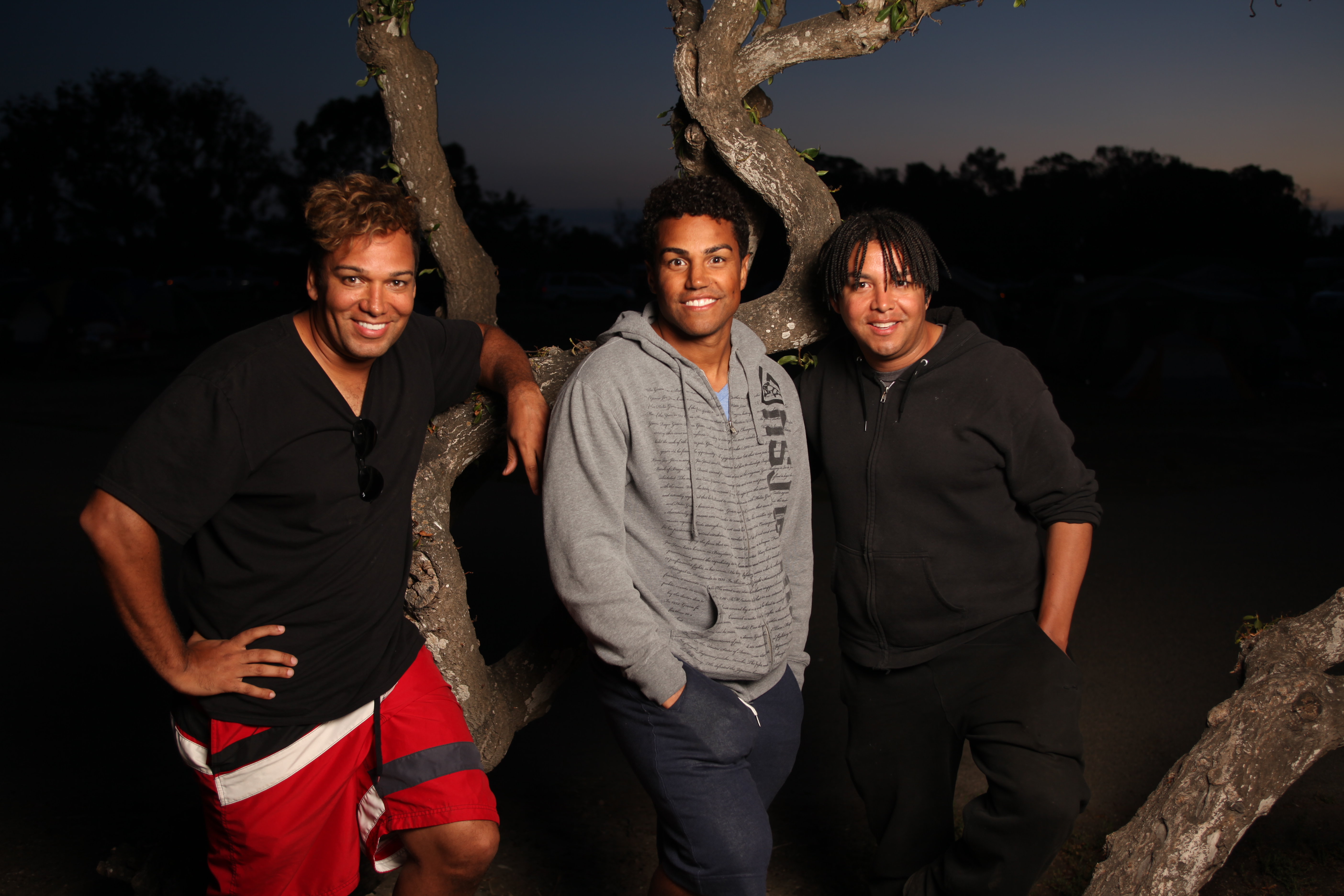 Their last name might sound familiar and you are more than likely well acquainted with their very popular and talented family. Taj, TJ, and Taryll, children of Tito Jackson of the notorious Jackson 5, are now starring in their own docuseries which focuses on them balancing family, a career, and finding their own identity. The three brothers take viewers in the world of what it means to really be a Jackson and not just media perceptions of them.

The three men who have taken the musical genes from their famed family and have constructed their own group 3T-which has sold over three million records and toured nationally-have, after been offered the opportunity years ago, agreed to let the world in on their personal and musical struggles being part of such a renowned family.

They want you to know, their show isn’t like your average reality show-probably because it isn’t a reality show-but a docuseries doing what it does best, telling a story the right, no scratch that, the real way. In the words of Taj, their show will give you nothing but the raw truth. They are letting their guard all the way down and letting us know the real truth.

Rnb Magazine had the chance to chat with the siblings and pick their brain about their family name, starring in their own docuseries, media scrutiny, living a normal life, and upcoming projects

Taj- Tell me how the reality show came about? Were you apprehensive about it at first? Any doubts?

We’ve been offered this about ten years ago. We felt that it wasn’t the right time to do it and it had to be done in a certain way. This time around, we felt this was the perfect way it could be done. The show is shot in more of a docuseries than a reality show. For us, that was kind of what we wanted and needed because I personally don’t watch reality shows because it’s scripted (most of them). For us, it had to be real. Scripted is the opposite for what the show is for us. We wanted the show on what it’s like to be a Jackson. I think the audience is smart enough to know if it’s real or not. So they won’t say “They’re just feeding us what they want to feed us.” So we really let down our guard which is scary and I think we live in the day in age now where you have to be out there and show yourself and when something is said about you and your family, in the past you could kind of just say I’ll let it blow off, but now you have to defend it otherwise you’re guilty- Guilty before innocent. It’s the opposite of what we were taught. You’re taught don’t engage with the media. Ignore them if they are being negative or making up lies. But now in today’s world people start believing it and then it starts becoming the truth so we’re going completely against what we normally would do.

TJ- Do you feel that because of your last name and coming from a legendary family the media and people have preconceptions about you guys?

I think so. That’s one reason we wanted to do this show because the way people think we are is completely different from the way we really are. Comparing us to second Generation of other families and other people but I think we’re a lot different. I’ll say this. I know this wasn’t really your question but there’s also a big shadow. We’ve been musicians since I was in diapers and one of the struggles is because of my legendary family or because of the success of my family it’s in a shadow, and it’s a tough box to get out of getting our own identity so that’s something that we also struggle with.

Taryll-How do you deal with the constant media scrutiny and what do you think is the hardest about having the last name Jackson?

Oh boy. A lot of things that’s said about our family is about a good 95 percent off. And whenever there is truth, it’s twisted and turned and it’s just like that telephone game where you say something one time and by the time it gets back to you it’s something completely different. It’s hard. It’s hard for us because that’s our family number one. Number two it’s hard to hear the lies or you hear things getting twisted because that is our family and you do want to set the record straight but it takes on to a whole life that you can’t even control. So that’s one thing that’s frustrating. One of the hardest things for us is- I don’t know depending on the edits of the show- it’s the name Jackson. It’s like you can’t walk around and say “Hey I’m a Jackson,” but nine out of ten questions are pretty much Jackson questions. You almost get lost in the shadow and you almost have to find your way to have an identity. It happens in everything. It’s not just in interviews and television. It’s just everyone’s so interested in knowing about our uncle Michael or his children or growing up a Jackson and this and that. You don’t really get to answer any questions about you and yourself and your projects or what it is that you do and what you have to offer. Whether it’s great or not, it never gets any type of day. So that would probably be one of the things that’s a little bit difficult.

What can we expect from you guys this season?

TJ– I could tell you this-I have a lot going on. There’s a lot on my plate. You see me trying to handle all of that and still have an allegiance to 3T and my brothers. I’m completely committed to my brothers and want nothing but the best but my family obligations make it more difficult. I think what you can expect from all of us is we’re a hundred percent real and you’re going to see us at our rawest and us at our realest point. That was really important to us. We feel that to make a good show, you have to be genuine and real and that’s what we did.

Taryll– My situation is a little bit different. While we were filming, I was going through a lot and I was turning forty. I was headed to that point in my life where I had a lot of questions about my career with my brothers, my relationship with my girlfriend, and about everything in life that I was doing. I just needed to figure out what it was I was doing. I went through a lot during it. There’s some ups and downs in it but in the end it’s all about family and my brothers and we figure it out. We work it out.

Taj– I think for me (laughs) I don’t want to give too much away but I thought this was the perfect opportunity to show the struggles that we deal with in terms of negative media, negative articles, lies printed about our family-you know kind of what I deal with in terms of going at them head on and trying to print retractions especially when you know they’re lies but no one steps up and call them on it- so this was for me an opportunity in a way to show what it’s like to deal with this kind of stuff but then at the same time the Jackson name for me is about a message. It’s about positivity and throughout the show you’re going to see that we’re able to do something positive that hopefully affects everyone in the world. I don’t want to give too much away, but that is the Jackson message. It’s the right thing to do. We were brought up that way. It’s in our genes to always give and give back. For me I found life purpose while doing the show in that way.

What is one thing you want people to know about you guys?

Taj– Random things about me that I want the world to know? Hmm. I mean not really. I feel the most important thing is that we’re human. We have emotions as a family and we have emotions as Jacksons. We’re not just a brand that people can make fun of or laugh about. It’s actually hurts us so for me that would be. People can watch the show and identify with us and realize there’s human beings behind the brand.

Taryll– I think it might be the same for all of us. We’re normal. We have a different name that’s known around the world but we don’t act any different because of it. We don’t expect any special treatment on things. When it comes down to it you gotta take care of each other and you gotta love each other. That’s what we’ve seen our uncles and our aunts do and our grandmother and everyone and that’s how we were raised and we follow that. We respect them and we pass that onto our children and to our little cousins. But that’s it. We’re going through the same thing everyone else goes through. It’s a little twist on it because we do have this name. Some things help you, some things hurt you, but in the end we’re just like everyone else. We have normal day things in life just like everybody else.

TJ– Everything that they said. I think that’s the main thing we want to get across. There’s been so many times, I can’t tell you, how many when people would meet us and after two minutes of talking to us they’re like, “Oh my God. I thought you guys were going to be so different.” And we’re like, “What did you expect?” And they say, “Well I thought you guys were going to be arrogant and snobby and I didn’t know you guys were going to be so down to earth.” And that’s shocking to us. I don’t know why they would think that. I guess they just think we’re spoiled little bratty kids running around with no responsibilities and no care. It couldn’t be any more different.

What can we expect from the group 3t?

TJ– Well right now we’re still in the studio recording. It’s long overdue. I would say about twelve years overdue or at least ten years overdue. So in parts of the show you’ll see the progress, the struggle with that. I think being a second Generation edition, a Jackson edition, there’s a certain level of expectation that we want to hit. That itself creates a lot of pressure and a lot of stress. We’re open in all of that and we show that because we are musicians and we’ve always been musicians. That’s what we love to do but a lot of times our struggles come from that because we want to be so great and we want to make a difference doing what we love. In terms of what you can expect, we’re on the journey of whether we’ll finish this album or not and to be honest we still don’t know that answer completely. We haven’t finished it.

Just One More Reason to Love Chance The Rapper