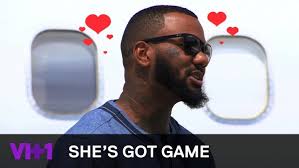 We’ve seen Ray J do. We’ve seen Flava Flav do it. But now…L.A. native The Game is on his quest for love and will be starring in his own reality show “She’s Got Game.” Reality t.v is not native to the rapper who also had a previous show titled “Marrying the Game” alongside his three children and then fiance Tiffany Cambridge. “Marrying the Game” aired for three seasons on VH1 leaving viewers optomistic that he and his wife would marry. Unfortunately things did not work out for the two and now the 35 year old is ready to settle down with one lucky lady.
This new reality show will have 10 episodes and already has the streets and the blogs talking. Looks like Game is serious about finding that special lady and in the teaser, is seen holding a “special” ring. Hmmm. Is Game serious about love this time? Will he be popping the question to one of the lucky lady contestants? What do you guys think? Will Game put his player card away and finally settle down? Check out the teaser below and watch “She’s Got Game” on August 10th.