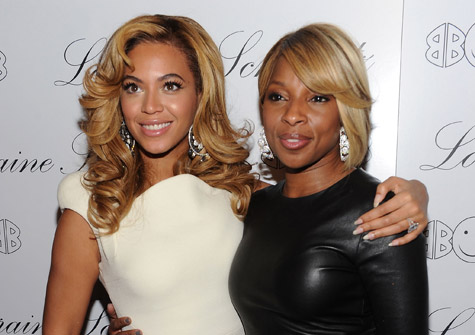 Two of the biggest voices in music are coming together. Mary J. Blige and Beyoncé have recorded a duet for Mary’s 10th studio album.

The song, entitled “Loving a Woman,” will appear on My Life II… The Journey Continues (Act I), Rap-Up.com has learned. The R&B divas have remained fans and friends throughout the years, but this marks their first major collaboration.

Beyoncé isn’t the only guest on the sequel to Mary’s My Life. The highly-anticipated project is set to feature collaborations with Nas and Rick Ross, and production from Danja, Jerry Wonda, Stargate, and Swizz Beatz, among others.

A video for the first single “25/8” will premiere in mid-October. The second single “Mr. Wrong,” produced and written by Jim Jonsin and Rico Love, will follow prior to the album’s release on November 21.

Chris Brown & Kelly Rowland Get Steamy on Stage Together [Video]

Khalid Teams up with Fifth Harmony’s Normani on “Love Lies”

RnB Magazine Chats With R&B/Bluegrass-Soul Duo, The Amours, As They Talk New...

Sang It!! Kiana Brown Blows Us Away In Her Cover To Drake’s...

Miguel Just Wants The Simple Things And With The Help Of Chris...