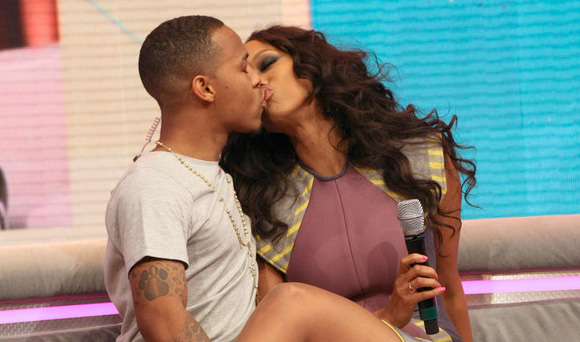 Is anyone else feeling a little weird or grossed out about the Tyra Banks-Bow Wow make out session? I don’t know if the two are trying to boost their appeal but this HAS TO BE a publicity stunt.

Bow Wow is a lucky man. He got to do something twice that most men dream to do at least once – lock lips with supermodel Tyra Banks.

During a recent airing of BET’s 106 & Park, Mr. 106 and the 39-year-old America’s Next Top Model host reenacted a kiss they had on the Tyra Banks’ talk show back in 2009, but this time they turned the temperature all the way up.

“We have serious history. He had a little crush on me and was hitting me up on Twitter nonstop. I think he was talking about wanting to know what my lips taste like and stuff,” Banks said before playing a file video of their first PDA four years ago.

That gave way for Bow to prep for another kiss as he sprayed on some breath freshener. “You tryna do the remix?” Tyra asked.

And a remix they did, as the 26-year-old rapper slid over close as Banks propped her legs on him and the two kissed twice

If you stomach can handle it, click on the video below and see the kiss for yourself.

Ashanti’s Stalker Back in Jail for Sending Sexual Tweets

On The Set with Kelly Rowland